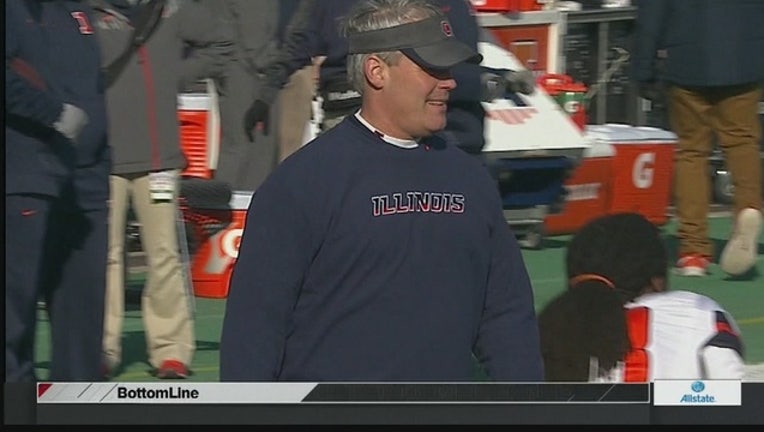 CHICAGO (AP) - The University of Illinois said Tuesday that it will pay $375,000 to settle a federal lawsuit filed by seven former female basketball players and another $250,000 to resolve any legal claims made by fired football coach Tim Beckman.

The players will split the one-time payment, campus officials said, and the university Board of Trustees must approve the settlement at its May 19 meeting. The players had sought at least $10 million in damages.

Through their attorney, Terry Ekl, the women said they are happy "no other student athlete may have to experience what we have." Ekl said the university agreed to a series of steps to prevent a recurrence of the alleged conduct, including establishing a code of conduct for coaches, "enhanced" racial sensitivity training for staff and hiring a compliance officer.

The lawsuit filed last year accused staff of creating a racially hostile environment. A university report found that accusations against coach Matt Bollant and an assistant, Mike Divilbiss, were unfounded. Divilbiss quit after the allegations surfaced.

"I sincerely apologize that these players did not have the positive experiences we desire and expect," Bollant said.

The university also offered an apology but said in a statement the settlement isn't an admission of wrongdoing on its part and it maintains evidence found by investigators doesn't support the grievances from the women. The former athletes contend an investigation done by the law firm hired by the university proved their claims.

Beckman was fired in August after a law firm hired by the university concluded he interfered in player medical decisions. The university said it stands by its decision, but agreed to the settlement to avoid costly litigation.

In a statement from the university, Beckman stated that during his tenure as head coach "he made a substantial contribution to the lives of student-athletes he coached and to the university's football program."

Beckman's settlement doesn't need approval from trustees. The university will pay for both settlements with money from its self-insurance plan.