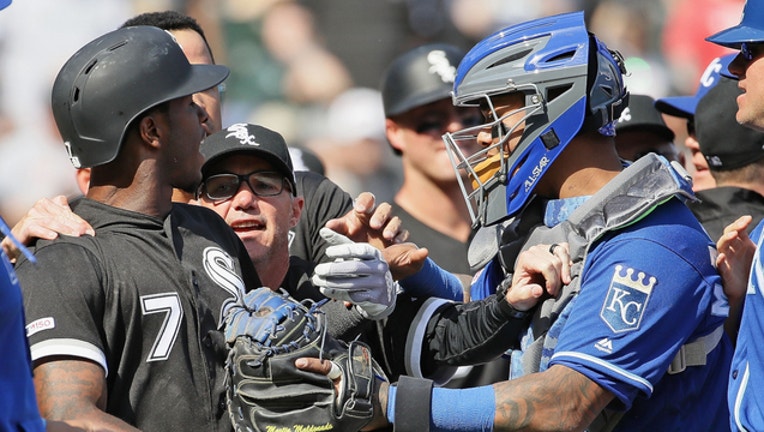 CHICAGO (AP) - Chicago White Sox shortstop Tim Anderson didn't go into detail Friday about what he said during a bench-clearing fracas with Kansas City earlier in the week after a report that he directed a racial slur at Royals pitcher Brad Keller.

Anderson was suspended one game for his actions Wednesday. Tempers flared after Keller hit Anderson, who had celebrated an earlier home run, with a fastball. Keller was penalized five games by Major League Baseball and is appealing.

ESPN, citing unidentified sources , said Anderson, who is black, called Keller, who is white, the N-word during the fray.

Anderson, the AL's top hitter this season, declined to discuss what was said on the field. He sat out Friday night's game at Detroit.

A person familiar with the penalty told The Associated Press that Anderson's suspension was the result of his language, which was included in the umpires' postgame report. The person spoke on condition of anonymity because that detail was not made public.

Anderson indicated he didn't think an appeal was worth it.

"I think that's too much," he said. "I really just take this one day and use it as an off day."

MLB concluded Keller intentionally hit Anderson. The Royals said Keller has decided to appeal the penalty, leaving him eligible to play until the process is complete.

Keller remains scheduled to make his next start Monday night at Tampa Bay, the team said, adding that Keller would not speak with the media Friday at Yankee Stadium.

Chicago manager Rick Renteria was suspended for one game for aggressive actions, and was to miss Friday night's game against the Tigers. Keller, Anderson and Renteria were fined by Chief Baseball Officer Joe Torre.

Anderson spiked his bat toward the White Sox dugout following a two-run homer Wednesday, and Keller hit him in the buttocks with his first pitch leading off the sixth.

Anderson and the Royals had a dustup last year, too.

"Timmy is going to be Timmy. I can't place a limit on anybody's personalities," Renteria said. "I can try to talk to all of our players like we do about what we think is the right thing to do. At the end of the day everyone is an individual and they can proceed as they should like the individuals that they are and do what they can do to hopefully minimize what everyone thinks is the issue."

"Timmy is a good kid and an outstanding baseball player and an emotional player, and I'll stand by Timmy," he said.