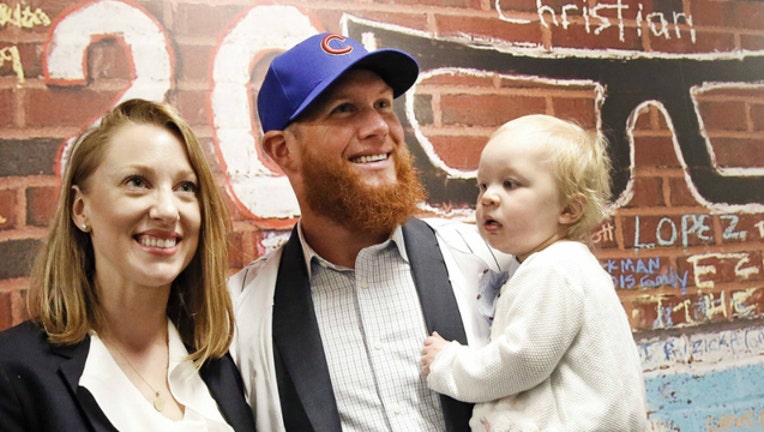 CHICAGO (AP) - After missing more than one-third of a season while waiting for the right offer, Craig Kimbrel found a home with the Chicago Cubs.

"Am I disappointed at where I am? No. not all at all. I'm very happy where I am," Kimbrel said Friday after the Cubs finalized a three-year contract that guarantees the closer $43 million.

Kimbrel helped Boston win the World Series, then turned down a $17.9 million qualifying offer from the Red Sox in November and waited.

"I don't think waiting around trying to find out who I'm going work for the next year has really been the hardest thing I've been through," he said. "If anything, there's blessings as well. Good to be home, spend time with family."

Spring training came and went. And still the 31-year-old right-hander did not get an offer he liked.

"We kind of understood kind of how the lay of the land was going throughout the offseason, the offers we were getting, the offers we were not getting," Kimbrel said. "I obviously had a lot of players reaching out, asking, 'Hey what's going on?' I kind of had to stay in my shell a little bit and let this thing ride out."

Signing Kimbrel before this week's amateur draft started would have cost his new team at least one amateur draft pick and possibly international signing bonus allocation.

"I'm glad I made it through this process, which was tough, and hopefully we can get this worked out between the players and the owners and move forward," Kimbrel said.

He would not go into his reasoning for turning down the qualifying offer.

"I don't want to dig too deep into that," he said. "There's a lot of aspects on both sides. There's a time and a place to talk about those and discuss those."

Kimbrel was optioned to Triple-A Iowa and will report to the Cubs training facility in Mesa, Arizona.

"We're not going to rush it," Cubs president of baseball operations Theo Epstein said "It's going to be tempting to get him here as soon as possible, but we're trying to plan this thing the right way so that he can be in a position to succeed not just immediately but all the way through October."

"One thing that's important to me is being able to play in front of a fanbase that's passionate about this game," Kimbrel said. "I did get to experience that in Boston and it would be hard to leave that kind of passion every night, especially with the role I'm in. I'm a very adrenaline-based player and knowing that each and every night the seats were going to be full definitely played a role in the decision."

Kimbrel has 333 saves and a 1.91 ERA over nine seasons with Atlanta, San Diego and Boston, averaging 14.7 strikeouts per nine innings.

Epstein said he stayed in touch with Kimbrel's agent David Meter during the offseason. Talks intensified this week,

"When Theo called, the doors opened and it moved pretty fast," Kimbrel said.

"Both guys reported that Craig looked like he was just about in midseason form and everything was working great, the ball was coming out really well," Epstein said. "We saw it as a unique opportunity. How often can you add an elite closer like Craig, someone who's arguably on a Hall-of-Fame trajectory, with the need that we have, midseason, without giving up any prospects?"

Chicago bullpen has 11 blown saves this year, yet the Cubs began Friday leading the NL Central. Brandon Morrow has not returned from offseason elbow surgery, and Pedro Strop came back Tuesday from a hamstring injury that had sidelined him since May 6. Strop and Steve Cishek have been closing.

"It gives you that playoff vibe a little earlier," Cubs manager Joe Maddon said. "When it comes to players in the clubhouse, when they feel that support from upstairs, it really matters a lot to them."