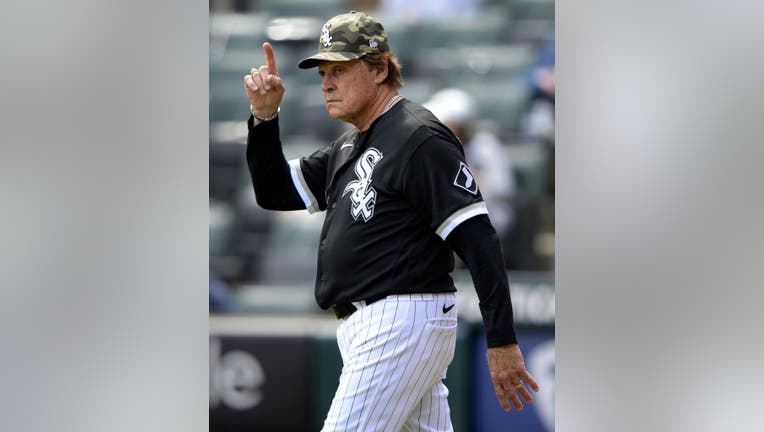 CHICAGO - Tony La Russa credited a long list of mentors. He paid tribute to his players, staff and family. He talked about working with strong ownership and front offices over the years.

For La Russa, it was their moment just as much as it belonged to him.

"There’s a lot of pieces to this day," he said.

La Russa moved past John McGraw into sole possession of second on baseball’s manager wins list, directing the Chicago White Sox to a 3-0 victory over the Detroit Tigers on Sunday.

It was win No. 2,764 for La Russa, who was hired by Chicago in October for his first managerial job since he led St. Louis to the World Series championship in 2011. It has been a bit of a bumpy ride so far, but the 76-year-old Hall of Famer has the White Sox on top of the AL Central.

The crowd of 20,068 cheered as La Russa’s accomplishment was announced after the win, and he responded by waving his hat and clapping toward the fans in appreciation.

While La Russa got into a public disagreement with Yermín Mercedes last month, drawing in teammates Tim Anderson and Lance Lynn on the side of the rookie slugger, La Russa’s players also seemed to enjoy the accomplishment as they greeted their manager in the postgame handshake line.

"The most important part of this season so far is the way the players have included me as part of the family," La Russa said.

Center fielder Adam Engel said he got his jersey out of the laundry for La Russa to sign, and pitcher Dylan Cease also praised the manager.

"It’s pretty legendary to say that we get to play for him," Cease said. "He’s calm. He’s funny. It’s nice having him at the helm."

Second on the list is almost assuredly the highest finish for La Russa, who also began his managerial career with the White Sox in 1979. The top spot belongs to Connie Mack with 3,731 victories.

La Russa watched as Chicago won for the 10th time in 14 games. Cease (4-2) struck out 10 in seven sparkling innings, and Anderson had two hits and two RBIs.

Detroit right-hander José Ureña (2-5) allowed three runs and six hits in five innings in his first big league start since May 26. He had been sidelined by a strained right forearm.

"The last couple innings, the slider felt great," Ureña said. "But the first couple, that was like a while."

The Tigers finished with five hits. They dropped three of four in the series.

Chicago scored each of its runs in the second. Andrew Vaughn singled in Adam Eaton and scored on Anderson’s two-run single with two outs.

That was more than enough for Cease, who allowed five hits and walked one. The right-hander improved to 7-0 with a 1.91 ERA against the Tigers, becoming the first White Sox pitcher to win his first seven career starts against a single opponent since Mark Buehrle versus Texas from 2001-2005, according to Elias Sports.

"Both his curveball and slider were elite today," Tigers manager A.J. Hinch said, "and he was in complete control of them."

Cease got some help from Engel, who robbed Niko Goodrum of a homer with a leaping catch at the center-field wall in the fifth. It was Engel’s first game of the season after he was sidelined by a right hamstring injury.

Aaron Bummer got three outs before Liam Hendriks worked the ninth for his 15th save.

Tigers: RHP Michael Fulmer was placed on the 10-day injured list with a right shoulder strain. RHP Jason Foley was brought up from Triple-A Toledo, and OF JaCoby Jones was designated for assignment. ... Hinch said RHP Spencer Turnbull (strained right forearm) will see the team doctors when the Tigers return to Detroit. "All signs are positive so far," Hinch said.

White Sox: OF Billy Hamilton (right oblique strain) was placed on the 10-day IL, and Engel was reinstated from the IL. ... LHP Jace Fry (microdiscectomy) pitched on back-to-back days for the first time during his rehab stint with Triple-A Charlotte, tossing a scoreless inning on Friday and Saturday. "We’re optimistic but it’s slow play," La Russa said. ... La Russa said his most recent report on Michael Kopech (strained left hamstring) said his throwing and exercise programs had been ramped up, and the right-hander was responding very well.

White Sox: Following an off day, LHP Carlos Rodón (5-2, 1.98 ERA) starts Tuesday night in the opener of a three-game series against Toronto. LHP Robbie Ray takes the mound for the visiting Blue Jays.