CHICAGO - Clayton Kershaw remembered getting knocked out in the shortest start of his stellar career. Fair to say, things went a little better for him in his return to Wrigley Field.

It turned out to be a good day for Mookie Betts, too.

Kershaw dominated over seven innings in the opener, Betts drove in five runs in the nightcap, and the Los Dodgers beat the Chicago Cubs 7-0 and 6-2 to sweep a split doubleheader on Saturday.

The Dodgers continued to roll along with Kershaw and Betts coming through. Betts smacked a three-run double in the second inning of Game 2 against Keegan Thompson to cap a four-run rally, and he added a two-run homer in the ninth to make it 6-2.

Los Angeles’ only other hit was a single in the ninth by Freddie Freeman. But the NL Central leaders drew nine walks on the way to their 17th win in 22 games.

Kershaw (4-0) scattered five hits while striking out two and walking one. The three-time Cy Young Award winner bounced back from a tough-luck loss to Detroit in which he surpassed Hall of Famer Don Sutton as the Dodgers’ career strikeout leader. 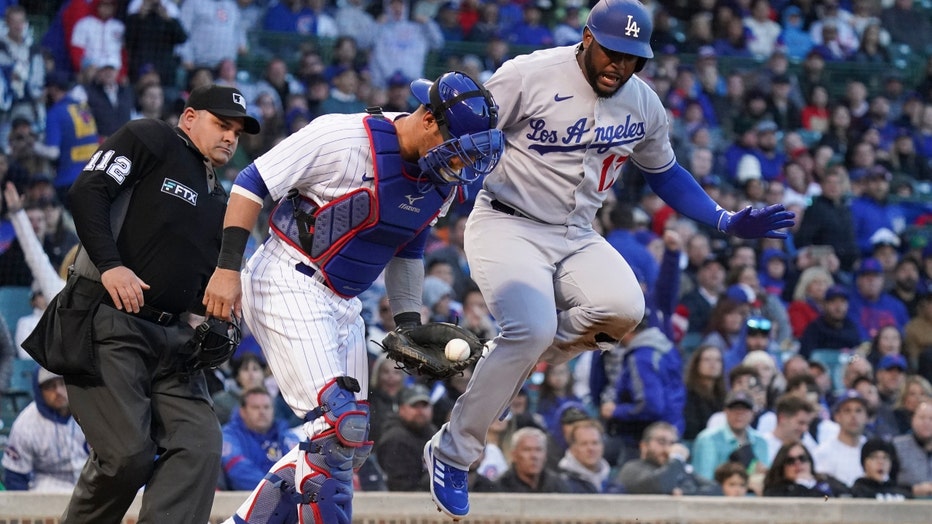 Hanser Alberto #17 of the Los Angeles Dodgers is safe at home against Yan Gomes #7 of the Chicago Cubs during the second inning of Game Two of a doubleheader at Wrigley Field on May 07, 2022 in Chicago, Illinois. (Nuccio DiNuzzo/Getty Images / Getty Images)

It was also a huge improvement over his previous appearance at Wrigley. Kershaw lasted just one inning on May 4, 2021, and the Dodgers lost 7-1 in the opener of a day-night doubleheader.

Asked if he feels better about pitching in the "Friendly Confines," Kershaw said, "Not really. But it worked out today."

The five-time All-Star was limited by a hip injury last year and got off to a slow start this season. But he seems to be rounding into form, with an eight-game hitting streak and three homers in that span.

"I think just the mental side of it is the biggest difference," said Betts, who’s been listening to mental training books. "Being more positive, looking for the next opportunity instead of dwelling on the last one. And just trying to enjoy it."

Tyler Anderson (3-0) went five innings in the second game, allowing two runs and four hits. The left-hander struck out seven and walked one.

Chicago’s Willson Contreras smacked a solo homer in the fifth. He also tripled and scored in the first and singled in the eighth. But the Cubs lost for the ninth time in 11 games.

"It’s really tough to watch, to be honest with you," Contreras said. "I know we’re trying our best to win some games. But things aren’t working our way. And the only thing we can control is the way we go about our business."

The Dodgers scored four in the second after Daniel Norris (0-2) walked the first three batters to load the bases.

Hanser Alberto drew a bases-loaded walk with two out against Thompson, and Betts ripped a three-run double down the left-field line on a 3-2 pitch to give Los Angeles a 4-1 lead.

Contreras cut it to 4-2 with his long drive to left in the fifth.

Norris, making his first start since 2020, gave up three runs in 1 1/3 innings. He walked three and struck out one.

Kershaw combined with two relievers for Los Angeles’ third shutout of the season on a windy afternoon.

"Sometimes, it’s better to be lucky than good," Kershaw said. "Those first couple innings, they hit a lot of balls hard and right at guys. The wind was swirling, pushing the ball in a little bit."

The Cubs were hurt by sloppy play in the field and on the bases. They were also shut out for the first time since a 10-0 drubbing by Milwaukee on Aug. 11, 2021.

Drew Smyly (1-3) lasted 4 1/3 innings in his return from the bereavement list. The left-hander lost his third straight start, allowing two earned runs and six hits in his first outing since April 28.

"I think he’s throwing great," manager David Ross said. "I think eight days off is tough to be sharp."

Dodgers: RHP Blake Treinen (right shoulder discomfort) is scheduled for an MRI in Los Angeles on Monday. He has been sidelined since April 14. ... LHP Andrew Heaney (shoulder inflammation) was to start throwing this weekend.

RHP Walker Buehler (3-1, 2.12 ERA) looks to win his third straight start for Los Angeles, while Chicago’s RHP Marcus Stroman (1-3, 5.13) tries to build on a win at Milwaukee. Buehler pitched his first career shutout at Arizona on April 25 and went five scoreless innings against Detroit on May 1.