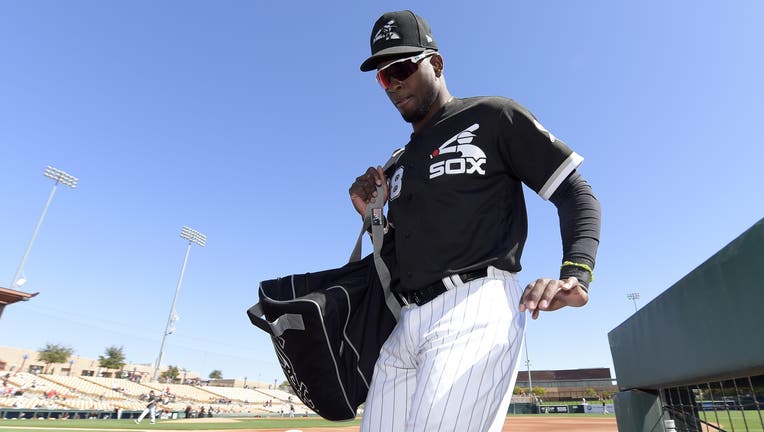 Luis Robert #88 of the Chicago White Sox enters the dugout prior to the game against the San Francisco Giants on February 25, 2020 at Camelback Ranch in Glendale Arizona. (Photo by Ron Vesely/Getty Images)

CHICAGO - New York Mets slugger Pete Alonso was the breakout star in an impressive group of major league rookies last summer. Now another wave of young talent is looking to leave its mark on the sport.

Here is a closer look at a handful of rookies who could play a starring role this year:

—INF Carter Kieboom, Washington Nationals: Anthony Rendon’s departure in free agency created an opening at third base for the Nationals, and the reigning World Series champions are looking to Kieboom to fill the role. Kieboom spent most of last year with Triple-A Fresno, hitting .303 with 16 homers and 79 RBIs in 109 games.

—LHP Brendan McKay, Tampa Bay Rays: McKay was hampered by shoulder stiffness early in spring training, but it looks as if the No. 4 pick in the 2017 amateur draft could take on a more prominent role with the Rays this year. The two-way player made his major league debut in June, going 2-4 with a 5.14 ERA in 13 games and 2 for 10 with a homer at the plate.

—OF Dylan Carlson, St. Louis Cardinals: The switch-hitting Carlson is on the brink of his major league debut after an impressive 2019 season. The outfielder, who doesn’t turn 22 until October, batted .292 with 26 homers and 68 RBIs over two minor league stops. He was selected by St. Louis with the No. 33 pick in the 2016 draft.

—OF Jo Adell, Los Angeles Angels: There’s a lot to like about the 6-foot-3 Adell, who turns 21 on April 8. He finished last season with Triple-A Salt Lake, hitting .264 with eight RBIs in 27 games with the Bees. The 10th overall pick in the 2017 amateur draft could be headed back to the minors for the start of this season, but he might not be there for very long.

—2B Gavin Lux, Los Angeles Dodgers: The loaded Dodgers have a couple of promising rookies who could help the club this year, led by the sweet-swinging Lux. The No. 20 pick in the 2016 amateur draft hit .347 in the minors last season. He made his big league debut in September, batting .240 with two homers in 23 games.

—LHP Jesús Luzardo, Oakland Athletics: Luzardo broke into the majors in September, striking out 16 in 12 innings and recording two saves in six relief appearances. But the A’s think his future is in their rotation. The left-hander went 1-1 with a 3.19 ERA in seven starts for Triple-A Las Vegas last year.

—OF Cristian Pache, Atlanta Braves: The reigning NL East champions have a glut of outfielders after signing Marcell Ozuna to an $18 million, one-year contract in January. But Pache could make his big league debut this summer. He batted .277 with 12 homers and 61 RBIs in the minors last season, finishing the year with Triple-A Gwinnett.

—RHP Deivi Garcia, New York Yankees: The development of the 20-year-old Garcia took on added significance for the Yankees after James Paxton had back surgery on Feb. 5 and Luis Severino was lost for the season with an elbow injury. Now Garcia could begin the year in New York’s rotation after he struck out 165 in 111 1/3 innings in the minors in 2019.

—2B Nico Hoerner, Chicago Cubs: The 22-year-old Hoerner became the first member of the 2018 draft class to join a big league roster when he was promoted in September. The former Stanford star looked pretty comfortable with the Cubs, batting .282 in 20 games. He is in the mix for the second base job this spring, but he could begin the year with Triple-A Iowa after he skipped that level on his way to the majors.

—RHP Casey Mize, Detroit Tigers: It’s a big season for the 22-year-old Mize, who threw a no-hitter in his Double-A Erie debut last year, but also was hampered by shoulder inflammation. The No. 1 overall pick in the 2018 amateur draft went 6-3 with a 3.20 ERA in 15 starts with the SeaWolves.

—LHP MacKenzie Gore, San Diego Padres: The 6-3 Gore is one of baseball’s top pitching prospects. He went 9-2 with a sparkling 1.69 ERA in 20 minor league starts in 2019, striking out 135 in 101 innings. He could be headed back to the minors — he finished last season with Double-A Amarillo and just recently turned 21 — but San Diego is hoping he will help anchor its rotation for years to come.