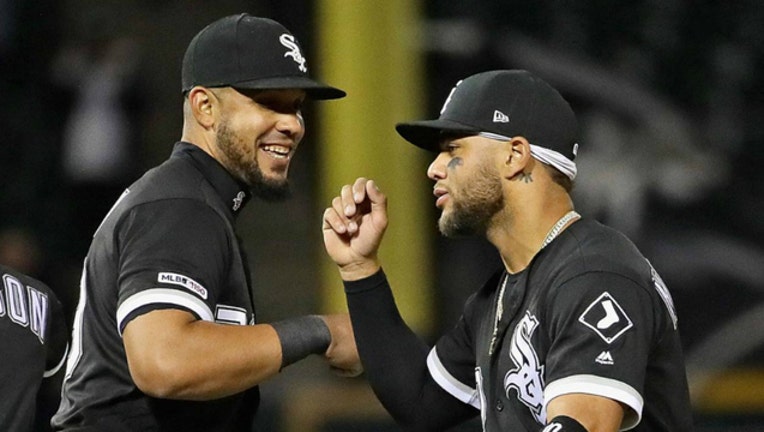 CHICAGO (AP) - Yoán Moncada admitted he was a little tired, and then chuckled at the whole thing.

José Abreu and Welington Castillo also connected for Chicago, which earned its third straight win. The White Sox improved to 4-3 against the Indians this season after they went 5-14 against the Tribe last year.

Chicago played on artificial turf in Toronto over the weekend, and manager Rick Renteria said it took a little out of his team. But Moncada's second career multihomer game and López's longest outing of the season were enough to overcome any lingering fatigue.

López (3-4) allowed one earned run and two hits, struck out six and walked two. It was the right-hander's first win since he fanned 14 in a 4-1 victory over Detroit on April 28.

"I have had good outings but today's was probably the best for the season," Lopez said through a translator. "I felt good. All my pitches were sharp today."

Francisco Lindor hit his 13th career leadoff homer for Cleveland, which lost for the third time in four games. Lindor also hit a sacrifice fly in the third, singled in the sixth and walked in the eighth, but that was pretty much it for the light-hitting Indians.

López retired his last eight batters. Aaron Bummer got one out before Alex Colomé finished the two-hitter for his eighth save in eight chances.

"We hit the ball hard today as a team. Seems like none of them dropped," Lindor said. "And then, when we had people on base, (López) made good pitches. He was effective."

The White Sox went ahead to stay with two-out homers in each of the first three innings. Abreu hit his 10th homer off Shane Bieber (2-2) in the first, and Castillo went deep in the second. After Lindor's sacrifice fly tied it at 2, Moncada belted a shot to right in the bottom half for his eighth of the season.

Moncada homered again in the sixth, this time on a drive to left , and Yolmer Sánchez doubled in Castillo in the seventh.

Bieber allowed five runs and seven hits in 6 1/3 innings in the first road loss of his career. The right-hander was 9-0 with a 3.22 ERA in 15 appearances on the road coming into the day.

"I just need to be better with two outs," he said.

The Indians' two hits tied a season low. They also dropped to 4-12 when they score two runs or less.

Indians: OF Tyler Naquin (left calf) was held out for the third consecutive game. "We were gonna play him tonight," manager Terry Francona said. "He went out and ran, and he just can't quite get over the hump so we're kinda re-evaluating it." If Naquin goes on the injured list, the Indians could bring up prospect Oscar Mercado from Triple-A Columbus. ... RHP Mike Clevinger (back strain) is scheduled for a bullpen session on Tuesday.

White Sox: LHP Carlos Rodón and RHP Nate Jones will miss the rest of the season. Rodón is scheduled for Tommy John surgery Wednesday in Los Angeles. Jones had surgery Monday to repair a flexor mass tear in his right forearm. ... OF Eloy Jiménez (high right ankle sprain) will begin a rehab assignment with Triple-A Charlotte on Tuesday. He could return to the White Sox before they begin a seven-game trip next week.