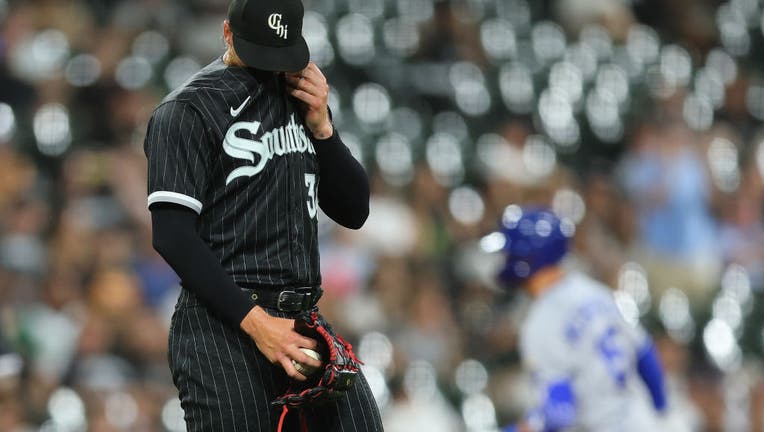 CHICAGO, ILLINOIS - AUGUST 01: Michael Kopech #34 of the Chicago White Sox reacts after allowing a solo home run to Whit Merrifield #15 of the Kansas City Royals during the sixth inning at Guaranteed Rate Field on August 01, 2022 in Chicago, Illinois

CHICAGO - Salvador Perez and Whit Merrifield hit solo home runs, Daniel Lynch took a shutout into the sixth inning in his return from the injured list and the Kansas City Royals edged the Chicago White Sox 2-1 on Monday night for their second straight win.

Perez launched a monster blast for the second straight game and his third homer in four contests after missing 31 games with a left thumb injury and surgery. The seven-time All Star has eight RBIs in the span.

Merrifield’s drive into the left-field bullpen off Michael Kopech (4-7) in the sixth might have been his last with Kansas City. A two-time All Star in seven seasons with the Royals, the second baseman has been the subject of trade rumors heading into Tuesday’s deadline.

Tim Anderson and Andrew Vaughn each had two hits off Lynch, but the White Sox slipped back to .500 (51-51). Pinch-hitter Gavin Sheets drove in a run with sac fly in the seventh.

Chicago, 23-29 at home, failed in a bid to win three consecutive games at Guaranteed Rate Field for the first time this season.

Lynch (4-7) allowed six hits, struck out seven and walked none in 5 1/3 innings as he returned from a rehab assignment at Triple-A Omaha and started in place of Brad Keller. The 6-foot-6 left-hander went on the injured list on July 18 with a blister on his pitching hand, the second time in a month the injury sidelined him.

Scott Barlow got the last six outs for his 17th save in 20 chances. He worked around a single in each of the last two innings.

Kopech allowed two runs and six hits in seven innings. He struck out three and walked one while throwing a career-high 100 pitches.

Perez’s 14th homer, off Kopech’s 2-1 slider in the fourth, was measured at 452 feet and put Kansas City ahead 1-0. The blast sailed over the multi-tiered center-field batter’s eye and bounced high off the concourse pavement in front of the scoreboard.

It came a day after Perez launched a three-run, 441-foot shot off Yankees All-Star closer Clay Holmes in the ninth inning in New York to lift the Royals to an 8-6 win. It was the first home run allowed this year by Holmes.

Merrifield went deep in the sixth to make it 2-0.

After Leury Garcia and Seby Zavala greeted reliever Wyatt Mills with singles in the seventh, Sheets’ deep fly scored Garcia to cut it to 2-1.

Perez has just three hits since coming back, but all have been homers.

The White Sox filled a gap in their bullpen by acquiring LHP Jake Diekman from Boston for catcher Reese McGuire and a player to be named or cash.

The Royals, who could be prominent sellers ahead of Tuesday’s deadline, made two minor deals to add organizational pitching depth.

Kansas City swapped 3B Emmanuel Rivera to the Arizona for RHP Luke Weaver, who was 1-1 with a 7.71 ERA for the Diamondbacks. The Royals sent cash to the Seattle Mariners for LHP Anthony Misiewicz, who was assigned to Triple-A Omaha.

White Sox: CF Luis Robert was in the team’s clubhouse after a rehab stint at Triple-A Charlotte, but not reactivated from the IL. Manager Tony La Russa said it was unlikely the speedy outfielder would play in the three-game series against Kansas City. Robert exited a game at Minnesota on July 15 with blurred vision and lightheadedness and was placed on the retroactive to July 19. Last weekend, the White Sox said the 2020 Gold Glove winner was suffering from cold symptoms.

Royals: RHP Carlos Hernandez was optioned to Triple-A Omaha to make room for Lynch on the roster.