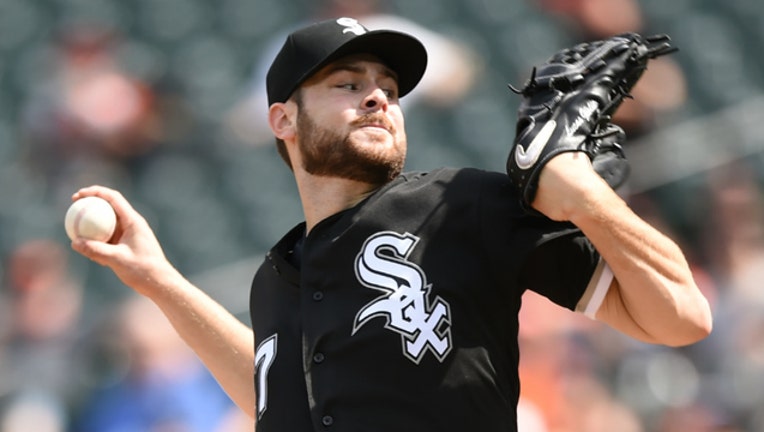 CHICAGO (AP) - After struggling mightily last season, Lucas Giolito is developing into one of best starters in the majors.

The 24-year-old right-hander pitched five-hit ball into the eighth inning and Tim Anderson homered, lifting the Chicago White Sox to a 2-0 victory over the Cleveland Indians on Sunday.

Giolito (8-1) struck out nine and walked none while improving to 6-0 with a 1.03 ERA in his last six starts. He hasn't lost in almost two months.

The consistency is a far cry from a year ago when he was 10-13 with a 6.13 ERA in his first full season in the majors.

"It's a little bit of a relief after last year," he said. "I know a lot of people were doubting me, at times I doubted myself, but I went into the offseason with a new plan and the plan is working, so I'm gonna stick with it."

Simply put, the plan is to throw more strikes and trust his stuff.

"He's put in a lot of work," manager Rick Renteria said. "He's attacking the strike zone very effectively, mixing in all of his pitches, commanding the strike zone, first-pitch strikes -- all those things that you want him to do."

Aaron Bummer got two outs in the eighth and Alex Colome finished for his 12th save in 12 chances.

Anderson led off the fourth with a drive to left-center for his ninth homer. He also doubled in Yolmer Sanchez with two out in the eighth, helping Chicago close out a 6-1 homestand.

Francisco Lindor had three of Cleveland's six hits. He led off the ninth with a double to left, but Colome retired the next three batters.

The Indians wasted a strong performance by Zach Plesac (0-1), who allowed four hits in seven innings in his second start in the majors.

The right-hander is the nephew of former major league reliever Dan Plesac, who pitched for six teams in 18 seasons.

"He fell behind a little dangerous hitter and paid for it," Cleveland manager Terry Francona said of Plesac. "Other than that, he didn't back down. It's a shame we didn't score because he pitched a great game."

The closest thing the Indians had to a rally came in the fifth when Greg Allen doubled down the right-field line with one out. Roberto Perez then lifted a drive to right-center in a bid for another extra-base hit, but Leury Garcia made a nice running catch on the warning track.

"I thought that one was on its way out, to be honest," Giolito said. "Luckily the park held it and Leury made a heck of a catch."

He then struck out Leonys Martin to end the threat.

Giolito exited after Perez singled with one out in the eighth. Bummer came on and induced pinch hitter Jordan Luplow to bounce into an inning-ending double play.

Giolito, who made his major league debut with the Nationals in 2016, is looking forward to Chicago's upcoming two-game trip to Washington.

"I wish I was pitching, but unfortunately that's just how it is," he said. "It's gonna be cool. I haven't been back there in a long time. I'm excited to get around the city and see some of the old spots I used to go to."

Indians: RHP Dan Otero (shoulder inflammation) was placed on the 10-day injured list and LHP Josh Smith was recalled from Triple-A Columbus. ... RHP Jefry Rodriguez, who left Saturday's start after four innings with right lat tightness, was scheduled to undergo an MRI in Cleveland on Sunday.

White Sox: 3B Yoan Moncada was held out of the lineup to give him two days of rest with Monday's day off. "He's been dealing with a leg issue," Renteria said. "I think it's time for us to give him a back-to-back days. That'll be really helpful for him."

Indians: RHP Shane Bieber (4-2, 3.67 ERA) starts the opener of a three-game home series against Minnesota on Tuesday night. LHP Devin Smeltzer (0-0, 0.00 ERA) makes his second start of the season for the Twins.