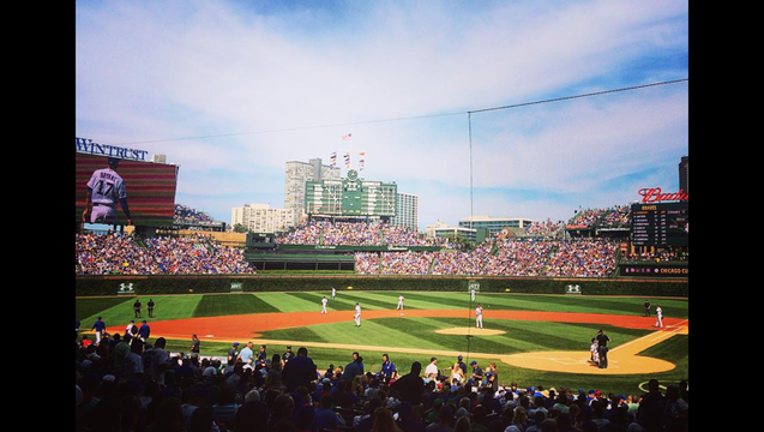 CHICAGO (AP) — Will Byington sat at the counter in the Starbucks across Addison Street from Wrigley Field editing pictures on a laptop.

A freelance photographer, his work lines the walls. One of his favorite subjects? The 101-year-old ballpark, of course.

After all, Byington lives one long home run from the batter's box. The apartment building he has lived in the past 10 years is just beyond the right-field foul pole, and the front door is 461 feet from home plate. Or so it says on his lease.

Where else but in Wrigleyville would a lease say that?

It's just another characteristic that sets the fabled stadium apart, along with the famed marquee, the manual scoreboard, the ivy-covered brick outfield walls and the ballhawks in the surrounding streets chasing home runs. Only Fenway Park in Boston is older in the major leagues.

With the Cubs advancing in the playoffs for the first time in 12 years and igniting hope that — at long last — a World Series title is in reach, the Friendly Confines are getting a rare moment on a big stage. The NL Championship Series shifts to Chicago for games 3 and 4 after the Mets grabbed the first two in New York over the weekend.

The Cubs had never clinched a playoff series at Wrigley Field until they knocked off St. Louis in the division series, and Tuesday's Game 3 is the latest the Cubs have ever played a game in the ballpark. They lost at home to Philadelphia on Oct. 23, 1910, giving the Athletics the World Series in five games. But back then, the Cubs played at the old West Side Park. And they were a mere two years removed from winning their last World Series.

Wrigley Field did not open until 1914, two years after Fenway, and the Cubs did not start playing there until 1916. Over the years, it has hosted everything from boxing to soccer to pro wrestling to the circus to the rodeo and college football and even ski jumping.

The manual scoreboard and ivy were added in 1937. Lights? Not until 1988, after every other ballpark got them.

Wrigley Field is in the early stages of an overhaul designed to bring it into the 21st century, one that added expanded bleachers this year along with large videoboards in left and right field. The one in right figures to get some TV time during the NCLS, considering the ball that Kyle Schwarber launched for a home run to help knock out St. Louis in the division series is still up there, encased in a plastic box where it settled on top.

Add that to the list of odd moments in a ballpark full of them.

Where else have players been known to hide balls in the ivy just in case they need to find one quickly to throw out a runner?

It's a place where a Bear was allowed on the field for the first National League game in 1916. A billy goat, however, got ejected during the 1945 World Series along with its angry owner, who placed a curse on the Cubs. And they haven't won the pennant since.

At Starbucks, supervisor Allie Murphy said it's not unusual to see fans and TV cameras milling about outside on game days hoping to catch a ballplayer.

"I try to make it a place that maybe they (the players) can get away from it a little bit," she said.

Sometimes Byington will peer across the street from Starbucks and see opposing players exercising on the ramps outside the visitors' clubhouse. He has run into Cubs chairman Tom Ricketts and executive Theo Epstein at the cafe, and he said he was there in August when several Atlanta Braves rookies in uniform made a coffee run for the veterans.

When Cubs manager Joe Maddon was asked about the quirks of Wrigley Field, he didn't mention the ivy or the scoreboard. To him, it's about looking out from the third-base dugout at the fans way back in the upper deck in right field.

"Whoever sits in that last seat up in that corner, I'm impressed every night because the view cannot be the best," he said. "The overhang has got to get in the way. There's got to be all these obstacles, but you still want to be there. So that's just a part of the allure of this ballpark."