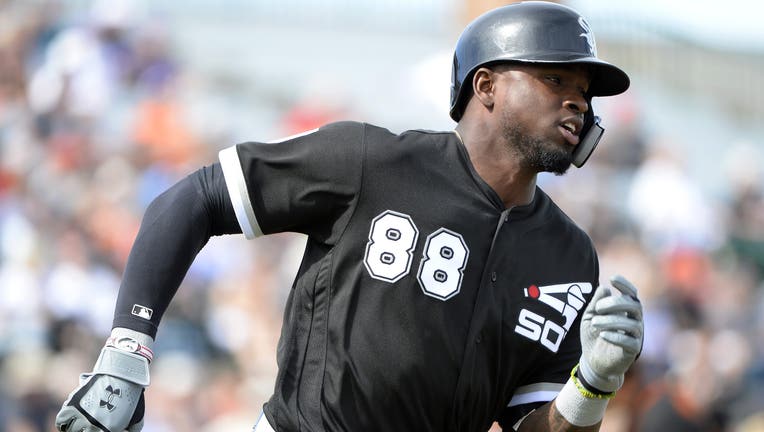 Luis Robert #88 of the Chicago White Sox runs the bases while hitting a triple against the San Francisco Giants on February 25, 2019 at Scottsdale Stadium in Scottsdale Arizona. (Photo by Ron Vesely/MLB Photos via Getty Images)

CHICAGO - The Chicago White Sox and Luis Robert agreed Thursday to a $50 million, six-year contract, clearing the way for the prized outfielder to open the season in the majors.

The White Sox can add the 22-year-old Cuban to their opening day roster if they think he is ready rather than hold him in the minors because of service time issues.

“I risked everything when I left Cuba to pursue this dream, and now I know the whole process and all my sacrifices will be rewarded,” Robert said in a statement. “My next step is to keep working as hard as ever, but now with more dedication and desire to help my team achieve our ultimate goal of winning championships.”

Robert combined to hit .328 with 32 home runs, 92 RBIs, 108 runs and 36 stolen bases last season at Class A, Double-A and Triple-A. He was the first minor leaguer since Joc Pederson in 2014 with at least 30 homers and 30 steals and the first White Sox prospect to do it since at least 1988. Robert ranked among the minor league leaders in total bases (tied for second), hits (fourth), extra-base hits (fourth) runs (fifth) and triples (tied for sixth).

Robert has hit .312 over three minor league seasons. Chicago signed him as an international free agent on May 27, 2017.

“Luis is a hugely talented player who showed his unique set of impressive skills last season and who we believe will be making an impact at the Major League level during the 2020 season,” general manager Rick Hahn said. “As he showed at three levels in 2019, Luis has the ability to impact a game dramatically with his bat, his speed, his glove and his arm. We see him as a very important part of a talented core of position players who we anticipate will be competing together with the White Sox for many seasons to come.”