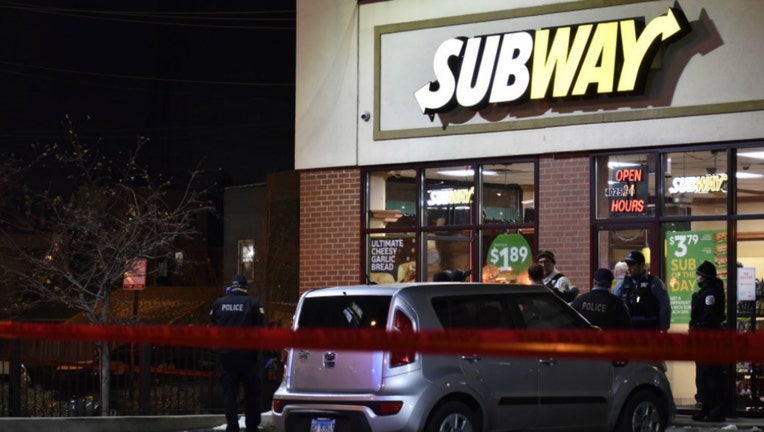 Police investigate the scene where a man was shot and killed inside a Subway on the Southeast Side Nov. 17, 2019.

CHICAGO - One man was killed and 26 people were wounded in shootings across Chicago over the weekend.

The 22-year-old man was shot to death Sunday inside a Subway restaurant on the Southeast Side.

Frank Corona was in the business at 2:05 a.m. in the 4000 block of East 106th Street when he was approached by a group of five or six males, according to Chicago police and the Cook County medical examiner’s office. They started to argue and someone in the group shot Corona in the head. The suspects left the area in a black SUV.

Corona was pronounced dead at the scene, authorities said.

The most recent nonfatal shooting left a 17-year-old boy wounded Sunday night in Little Village on the Southwest Side.

He was sitting in a parked vehicle about 10 p.m. in the 2800 block of South Spaulding Avenue when someone shot at him from a passing black SUV, police said. He was hit in the leg and taken to Mount Sinai Hospital in good condition.

Earlier Sunday morning, a woman was wounded in Marquette Park on the South Side.

The 24-year-old was walking about 4:15 a.m. in the 6300 block of South Rockwell Street when she heard gunfire and felt pain, police said. She was hit twice in the shoulder and a friend took her to Mount Sinai Hospital, where she is in good condition. The woman told police she didn’t see who shot her or know where the shots came from.

Less than an hour earlier, a man and a teenage boy were shot in McKinley Park on the South Side.

They were passengers in a vehicle about 3:42 a.m. in the 3700 block of South Damen Avenue when someone fired at them from a passing dark-colored sedan, police said. The 17-year-old and 27-year-old were both struck in the arm. An acquaintance took them to Mount Sinai Hospital, and both were in good condition.

About an hour earlier, three people were shot at a house party in East Garfield Park on the West Side.

They were on a porch during a house party about 2:45 a.m. in the 700 block of North Harding Avenue when someone fired at them, possibly from the sidewalk, according to police.

On Saturday morning, two men were shot and seriously wounded in South Shore.

The men, 23 and 49, were outside about 10:10 a.m. in the 1600 block of East 79th Street when someone got out of a maroon four-door sedan and opened fire, police said. The 23-year old was shot in the shoulder and buttocks while the 49-year-old was struck in the chest. Both were taken to the University of Chicago Medical Center in serious condition.

Another triple shooting happened Saturday morning in Fifth City on the West Side.

The trio was on the sidewalk about 2 a.m. in the 3300 block of West Monroe Street when someone opened fire from a gangway, police said. A 38-year-old man was struck in the back and legs, while a 28-year-old man was shot in the legs and abdomen. They were taken to Mount Sinai Hospital in serious condition. The third man, 37, was also shot in the legs and had his condition stabilized at the same hospital.

The weekend’s earliest shooting left a man and a woman injured Friday evening in Lawndale on the West Side.

They were in a vehicle at 6:12 p.m. in the 3100 block of West Polk Street when someone approached them and opened fire, police said. The woman, 20, was hit in the arm and taken to Mount Sinai Hospital. The 21-year-old man was struck in the leg and refused medical attention. A police source said the incident appeared to be domestic-related.

Twelve other people were injured by gun violence in Chicago between 5 p.m. Friday and 5 a.m. Monday.