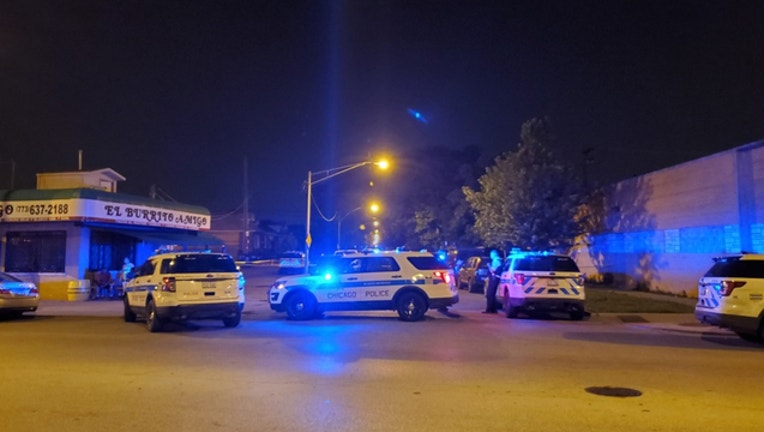 Police investigate a shooting July 2, 2019 in Hanson Park on the North Side | Tyler LaRiviere/Sun-Times

CHICAGO - One person was killed and five others were wounded in shootings across Chicago Tuesday.

Two men were shot, one fatally, in Hanson Park on the North Side.

Police did not have a description of the shooter but believe that shots may have been fired from across the street.

A teen was wounded after being shot in Lawndale on the West Side.

The 17-year-old boy was standing about 5:13 p.m. in the 1800 block of South Homan Avenue when he heard shots and ran, Chicago police said. He ran to the 1600 block of South Christiana where he realized he was shot once in the foot.

The teen was taken to Stroger Hospital where his condition was stabilized, police said.

A minute earlier, a 22-year-old man was wounded after he was shot in both arms in Chatham on the South Side.

His condition was stabilized at the University of Chicago Medical Center, police said.

A 19-year-old was wounded after he was shot during a confrontation with a group in Austin.

He was standing outside about 4:07 p.m. in the 4800 block of West Fulton Street when a vehicle drove up, Chicago police said. Three to four people with masks got out of the vehicle and started firing shots.

The man was struck twice in the upper left leg, and the group drove off. He was taken to Loretto Hospital in serious condition, police said.

The earliest non-fatal shooting injured an 18-year-old in Lawndale.

He told police he was in a vehicle eastbound in the 4400 block of West Roosevelt Road about 1:30 p.m. when he thought he heard fireworks, looked down and felt pain, Chicago police said.

The man was struck twice in the hand and didn't see where the shots came from, police said. He took himself to Mount Sinai Hospital, where his condition was stabilized.

Monday's shootings killed one person and wounded eight others.