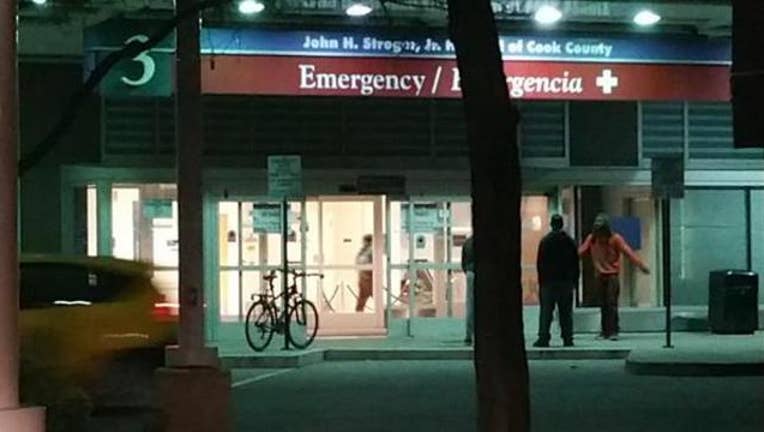 CHICAGO (STMW) - A man was killed and at least 14 people were wounded — five of them critically — in shootings between Thursday afternoon and early Friday on the South and West Sides.

The homicide happened about 3:35 p.m. in the South Commons neighborhood.

Darian Gunn, 20, was standing in the street in the 3000 block of South Michigan Avenue when a gunman inside a dark-colored car opened fire, striking him in the back and buttocks, according to Chicago Police and the Cook County medical examiner’s office.

The car then continued eastbound on Cermak Road, police said.

Most recently, two men were shot while standing on a Roseland neighborhood sidewalk.

The 22-year-old was shot in the left arm and took himself to the University of Chicago Medical Center, police said. The older man was taken to Advocate Christ Medical Center in Oak Lawn with a gunshot wound to his right leg. Both their conditions had stabilized.

About 45 minutes earlier, a man was shot during a robbery in West Englewood.

The 39-year-old was walking in the 6600 block of South Justine when two males walked up and announced a robbery, police said. The two took his watch and wallet before shooting him in the left foot and running off. The man was driven to Holy Cross Hospital, where his condition stabilized, police said.

About 12:35 a.m., a 24-year-old man was arguing with another male in the 13200 block of South Vernon when the male pulled a handgun and shot him in the right arm, police said. He was taken to Roseland Community Hospital in good condition.

About 11:35 p.m., the man was outside in the 3500 block of West 61st Place when someone in a passing vehicle shot him in the back, police said. He was taken to Advocate Christ Medical Center in Oak Lawn in serious condition.

About 8:04 p.m., a 23-year-old man was shot in the abdomen in the 4100 block of West Van Buren in the West Garfield Park neighborhood. His condition was stabilized at Stroger Hospital but additional details were not immediately available.

About 20 minutes earlier, five people were wounded in a Back of the Yards shooting.

About 7:45 p.m., the group was standing on a sidewalk in the 5100 block of South Morgan when they heard shots and felt pain, according to Chicago Police.

A 27-year-old man shot in both shins and a 32-year-old man grazed in the shoulder were also taken to Stroger. Their conditions stabilized, police said.

The men who were shot have documented gang ties, police said.

The possible drive-by attack happened in the 1000 block of West 71st Street, where a 19-year-old was shot in the abdomen and a 21-year-old in the leg, police said.

Both were taken to Christ Medical Center in Oak Lawn, where the younger man was in critical condition, and the older man in good condition.

A 30-year-old man was standing outside in the 8300 block of South Kerfoot when a gunman walked up and shot him in the head, police said.

He was taken to a hospital in critical condition.