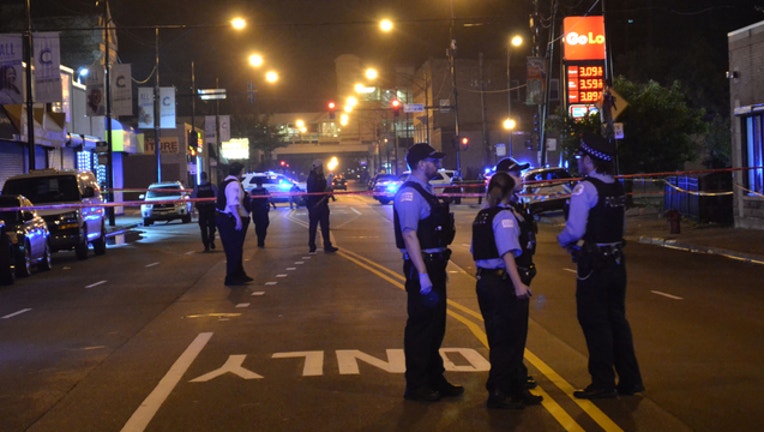 CHICAGO (SUN TIMES MEDIA WIRE) - Two men were killed and at least 14 others were wounded Saturday in city shootings within a 24-hour period.

A single shooting in Bronzeville killed one man and wounded four others, including a 15-year-old boy, just after midnight.

The second fatal shooting happened about 6:10 p.m. in Englewood on the South Side. Lashawn C. Haynes, 40, was shot in the 5500 block of South Shields, according to Chicago Police and the Cook County Medical Examiner’s Office. Witnesses told police he was walking down the street when a black or gray SUV drove by and a passenger in the front seat fired five to six shots, striking him once in the head.

Haynes was taken to the University of Chicago Medical Center in critical condition and was later pronounced dead, authorities said. He lived in Dolton.

The last shooting Saturday wounded a 19-year-old woman about 11:30 p.m. in the South Side Woodlawn neighborhood. The woman was a passenger in a vehicle in the 6500 block of South Drexel Avenue when someone shot at her from behind a tree, police said. She was struck in her leg, and was taken to University of Chicago Medical Center in good condition.

About 10:40 p.m., a man was shot in the Gage Park neighborhood on the Southwest Side. The 28-year-old was walking on a sidewalk in the 2400 block of West 56th Street when someone in a passing red car shot him, police said. The man was struck in his legs and back, and was taken to Mount Sinai Hospital, where his condition stabilized.

About an hour earlier, a man was shot in an alley in the Rogers Park neighborhood on the North Side. The 35-year-old man was walking down the alley when he saw people fighting and someone fired shots at 9:37 p.m. in the 6700 North Clark, police said. He was shot in the upper chest and was taken to St. Francis Hospital in Evanston, where his condition stabilized.

Two men were shot about 9:20 p.m. in Washington Park on the South Side. The two were standing in the park when shots were fired in the 5200 block of South Payne Drive, according to police. A 21-year-old was hit in the right thigh and left leg and was taken to the University of Chicago Medical Center, where his condition stabilized. A 28-year-old was shot in the chest and right arm and was stabilized at Stroger Hospital.

Earlier in the afternoon, a boy was shot in the Englewood neighborhood on the South Side. The 17-year-old was standing outside when a vehicle drove by and someone inside fired shots at 2:49 p.m. in the 6700 block of South Sangamon, according to police. The boy was struck in the lower left buttocks. He was taken to the University of Illinois Hospital, where his condition stabilized.