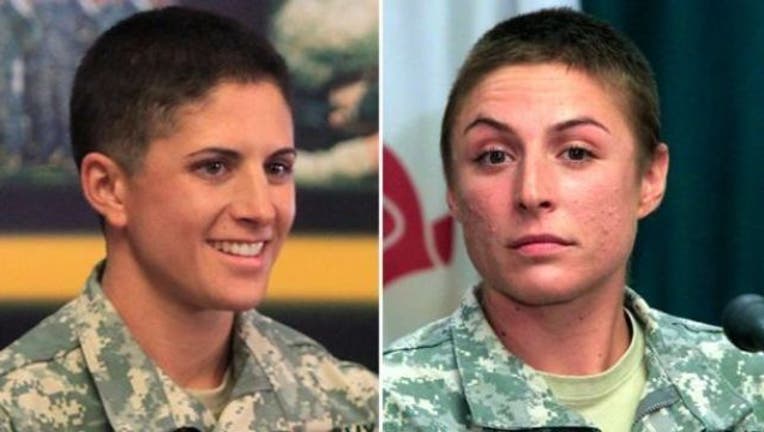 FORT BENNING, Ga. (AP) - The first two women to pass the Army's notoriously difficult Ranger School impressed male classmates left in their dust during road marches, and proved their mettle as teammates by helping carry heavy weapons when others were too fatigued to lift another ounce.

As the Pentagon weighs a decision on allowing women to serve in combat jobs long held by men only, a Ranger School comrade offered a blunt assessment of Capt. Kristen Griest and 1st Lt. Shaye Haver as they spoke to reporters Thursday.

"They can serve by my side anytime because I know I can trust them," 2nd Lt. Erickson Krogh said. "Especially these two. I'd have no qualms about serving with them in combat."

Griest, 26, of Orange, Connecticut, and Haver, 25, of Copperas Cove, Texas, will become the first women to wear the Army's coveted Ranger tab when they graduate alongside 94 male soldiers Friday at Fort Benning.

Despite proving their grit in the two-month Ranger course, the two women are still unable to join infantry, armor and special forces units - including the 75th Ranger Regiment. That could change next year after the Pentagon makes its recommendations.

At a news conference Friday, the women stopped short of saying they earned a place in combat units by finishing the notoriously grueling two-month Ranger course - something only about 3 percent of Army soldiers accomplish. But Griest said she hopes the achievement at least carries some weight in the final decisions.

She said she might be interested in a special forces career if that path was open to her.

Haver, an Apache helicopter pilot stationed at Fort Carson, Colorado, said she plans to stick with aviation. She acknowledged going into Ranger School with some doubts as to how male soldiers would react.

"It's pretty cool that they have accepted us," she said. "We ourselves came into this with our guard up just in case there were haters or naysayers. But we didn't come with chips on our shoulders like we had anything to prove."

Several male classmates chosen by the Army to attend a news conference with Griest and Haver acknowledged they too weren't sure at first that female soldiers could handle long marches and patrols carrying rucksacks, rifles and other gear weighing 100 pounds or more.

Spc. Christopher Carvalho, a medic in the same Ranger school class, said his skepticism ended on the first road march when the women left many of their male counterparts far behind.

"Right then and there that's what validated me to say these women are here to stay," Carvalho said.

Classmates 2nd Lt. Michael Janowski and 2nd Lt. Zachary Hanger both told of how Haver and Griest jumped in to help carry heavy loads when other male trainees were too fatigued to assist.

Haver and Griest - both graduates of the U.S. Military Academy at West Point - not only finished the course they started in April. They both had to start from scratch, having failed two previous attempts.

"These two soldiers have absolutely earned the respect of every Ranger instructor," Command Sgt. Major Curtis Arnold told reporters. "They do not quit and they do not complain."

Arnold said he suspects Haver and Griest had extra motivation to graduate "because you know everyone is watching. And truthfully there are probably a few folks who want you to fail. So you've got to put out 110 percent."

Both women were among 19 female soldiers who enrolled in Ranger school in April. During the last of their three attempts, 364 soldiers started and only 96 finished.

Before this spring, only men had been allowed to enroll since the Ranger School opened in 1972.

Ranger School teaches soldiers combat skills, from standard patrols to raids and air assaults, while pushing the limits of the trainees' physical and mental endurance. It's considered one of the most difficult courses in the Army.

Soldiers spend days scaling mountains in north Georgia and slogging through swampy terrain in Florida. They travel long distances by foot carrying rucksacks, weapons and other gear weighing 100 pounds or more. And they don't get much chance to rest or refuel.

For much of the course, Ranger trainees are fed just twice a day, eating nothing but military rations sealed in plastic bags. Many nights they get only a single hour of sleep.

"You're way too tired and way too hungry to care" about the gender of fellow Ranger School classmates, said Staff Sgt. Michael Calderon, one of the women's classmates. "In your mind you knew what was going on, but at the end of the day everyone was a Ranger."