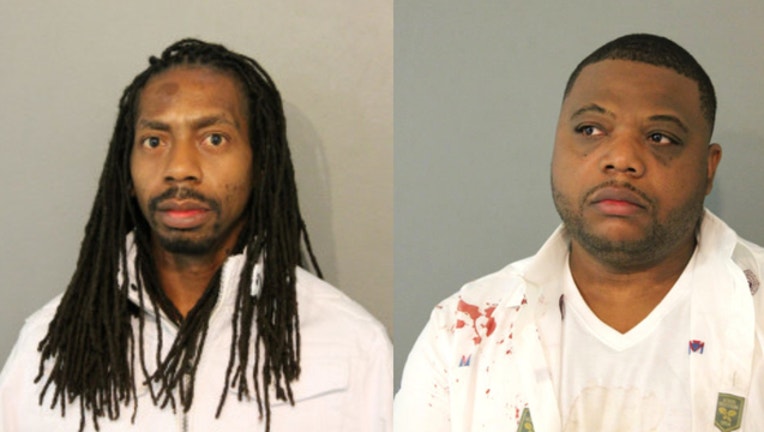 CHICAGO (SUN TIMES MEDIA WIRE) - Two men are facing charges in connection to a confrontation with police outside a River North nightclub where 40 gunshots were fired early Wednesday.

Antione Davis is accused of hitting an officer with his car as he tried to leave the parking lot of a nightclub in the 300 block of West Huron, Chicago police and Cook County prosecutors said. Neither man faces a weapons charge.

Levertise Hewing, 32, is accused of battering a police officer as the officer tried to take Davis into custody after Hewing and Davis crashed their car on the Kennedy Expressway, authorities said.

A video of the encounter posted to social media shows a confrontation in the club’s parking lot followed by a minute of gunfire. Police said no one was injured in the shooting.

Police were on scene at 3:13 a.m. — within a minute of the first shots — and attempted to stop a fleeing vehicle.

Police said Davis, 36, was the driver of the vehicle that drove off against the officers’ orders. He was arrested shortly after.

During the same incident, Hewing had a “physical altercation” with a sergeant, in which the sergeant was battered by Hewing, police said.

Hewing, 32, is charged with a felony count of aggravated battery to an officer, and two misdemeanor counts of resisting arrest and reckless conduct, police said.

Davis, of Hanover Park, faces a felony charge of aggravated assault to an officer and two misdemeanor counts of reckless conduct and driving on a revoked license, police said.

Judge Susana Ortiz said Davis “used the vehicle as a weapon” against the officer; she ordered Davis held without bail, then ordered Hewing held in lieu of posting $500 bond.

Both men are lifelong Cook County residents, according to their assistant public defender. Davis is a recruiter at a trucking company in Northlake and has two daughters. Hewing, a part-time mechanic, lives with his grandmother. He has three children, his attorney said.