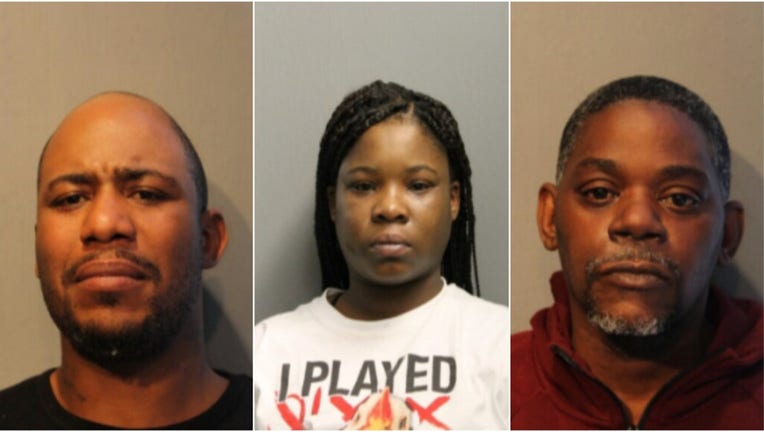 CHICAGO - An Englewood couple serving as caretakers to a 43-year-old schizophrenic man are accused of beating and torturing him with the help of a friend before the victim’s battered body was found in a garage.

Chicago police officers, who were responding to a well being check, found the lifeless body of Frederick Johnson in the 900 block of West 71st Street on June 25.

Santino Carter, Dominique Beck, and Brian Gray — a man the couple allegedly hired to help with the crime — have all been charged with his murder, while Beck, 29, faces an additional count of neglect as a caregiver.

Judge John F. Lyke ordered Carter and Gray to be held without bail Wednesday, while Beck was handed $1 million bail.

Johnson had been living with Carter, 38, and Beck in their home for about two years, Cook County prosecutors said Wednesday, adding that the couple collected Johnson’s disability checks to serve as his caretakers.

After Johnson was found dead, the couple allegedly told investigators that they had kicked him out of the home two weeks earlier for defecating in their home, in the 6900 block of South Peoria Street.

However, two months later, a witness in Carter’s car told authorities that on June 24, Beck called Carter to say that Johnson had defecated in the living room and bathroom and pushed her when she confronted him, prosecutors said.

The witness and Carter then drove to the couple’s home where the witness allegedly saw Carter punish Johnson by beating him and making him touch his toes for hours, and heard him strike Johnson with a hammer, prosecutors said.

Carter then called allegedly called Gray, 48, and paid him $100 to help him drag Johnson to an alley and clean up the scene, prosecutors said.

Phone records, Johnson’s autopsy and a search of the house corroborated the information, prosecutors said.

The three suspects were taken into custody Sunday, prosecutors said. They are expected back in court Dec. 14.