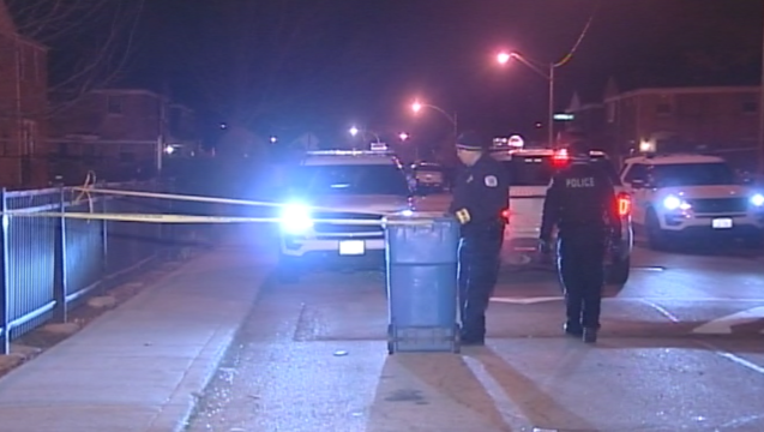 A 15-year-old boy died after being shot early Saturday in the Jeffery Manor neighborhood on the Far South Side, according to Chicago Police. | NVP video

CHICAGO (Sun-Times Media Wire) - Three people were killed — including two 15-year-old boys — and 19 others were wounded in shootings across Chicago between Friday evening and Monday morning, according to Chicago Police.

A 27-year-old man was killed in a shooting that also left and a woman wounded Sunday night in the Vittum Park neighborhood on the Southwest Side, police said. The two were standing outside a parked vehicle about 9:30 p.m. in the 4700 block of South Leamington when a black Dodge Ram truck pulled up. An argument ensued, and someone inside the truck fired shots at the pair.

The man suffered a gunshot wound to the chest and was pronounced dead at the scene, police said. The Cook County medical examiner’s office did not immediately provide information on the death. The woman, 29, was shot in the back near her shoulder and was taken to Mount Sinai Hospital, where her condition was stabilized.

One of the 15-year-old boys, identified as Clavont Eubanks, was gunned down early Saturday in the Jeffery Manor neighborhood on the Far South Side, authorities said. He was walking through a park at 3:27 a.m. in the 2100 block of East 97th Street when he heard gunfire and realized he’d been shot in the upper-right chest. He then ran to a home in the 2200 block of East 97th Street. Eubanks, who lived in the same neighborhood, was taken to Christ Medical Center in Oak Lawn, where he died at 4:19 a.m.

Another 15-year-old boy was shot and killed Friday evening in the Roseland neighborhood on the Far South Side. Just after 5 p.m., Willie Woodus was walking in an alley in the 11400 block of South Stewart when a gray Pontiac drove by and someone inside it opened fire, hitting him in the head, chest and abdomen, authorities said. Woodus was taken to Christ Medical Center, where he was pronounced dead at 6:07 p.m. He lived in the West Pullman neighborhood on the Far South Side.

The weekend’s latest nonfatal shooting happened just after midnight Monday in the Avalon Park neighborhood on the South Side. A 39-year-old woman and 40-year-old man were in a car in the 8200 block of South Blackstone when someone ran up to the vehicle and opened fire, police said. The woman was shot in the chest and taken in serious condition to Northwestern Memorial Hospital. The man suffered a gunshot wound to the left arm and was taken to Jackson Park Hospital, where his condition was stabilized.

At least 16 other people were wounded in shootings across the city between 5 p.m. Friday and 6 a.m. Monday, police said.

Last weekend, 27 people were shot in Chicago, three of them fatally.