TOKYO (AP) - On Monday, Toyota announced it won’t be airing any Olympic-themed advertisements on Japanese television during the Tokyo Games despite being one of the IOC’s top corporate sponsors.

The extraordinary decision by the country’s top automaker underlines how polarizing the Games have become in Japan as COVID-19 infections rise ahead of Friday’s opening ceremony.

"There are many issues with these Games that are proving difficult to be understood," Toyota Chief Communications Officer Jun Nagata told reporters Monday.

Chief Executive Akio Toyoda, the company founder’s grandson, will be skipping the opening ceremony. That’s despite about 200 athletes taking part in the Olympics and Paralympics who are affiliated with Toyota, including swimmer Takeshi Kawamoto and softball player Miu Goto. 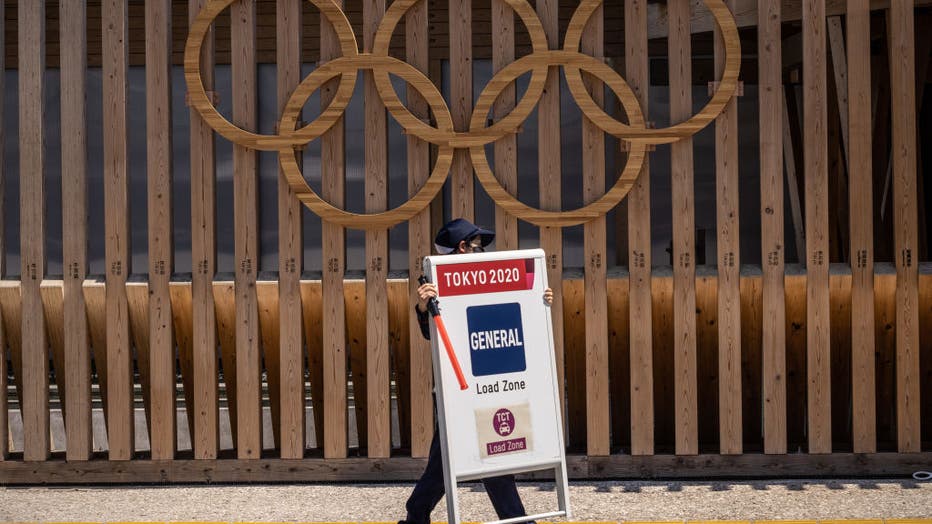 A security guard carries a sign past Olympic Rings near the Tokyo Olympics athletes village on July 19, 2021 in Tokyo, Japan. (Photo by Carl Court/Getty Images)

Nagata said the company will continue to support its athletes.

Being a corporate sponsor for the Olympics is usually all about using the games as a platform to enhance the brand. But being linked with a pandemic-era Games may be viewed by some as a potential marketing problem.

Masa Takaya, a Tokyo 2020 spokesperson, said sponsors each make its own decisions on their messages.

"There is a mixed public sentiment towards the Games," Takaya said.

RELATED: WHO says it was 'premature' to rule out lab leak as COVID-19 origin

"I need to emphasize that those partners and companies have been very supportive to Tokyo 2020. They are passionate about making these Games happen."

The company has no plans to adjust its Olympic marketing plans in the U.S.

Meanwhile, Kara Eaker, an alternate on the US women's gymnastics Olympic team has tested positive for COVID-19 in Japan.

Al Fong, the personal coach for both Eaker and fellow Olympic alternate Leanne Wong, confirmed the positive test in an email to The Associated Press on Monday. Wong said Eaker, 18, was vaccinated against the novel coronavirus two months ago.

Both Eaker and Wong have been placed in isolation.

The positive test came after Eaker received what was described as a "false positive" over the weekend. Eaker took a subsequent test that was negative before testing positive again multiple times.

Olympic champion Simone Biles was not affected, nor were any of the other favorites to win the team gold.

RELATED: Some in US pushing for more COVID restrictions, masking, as delta variant spreads

"One of the replacement athletes for the women’s artistic gymnastics team received a positive COVID test on Sunday, July 18. After reviewing the implemented COVID protocols with members of the delegation, the local government determined that the affected replacement athlete and one other replacement athlete would be subject to additional quarantine restrictions," the USAG statement said. "Accordingly, on Monday, the Olympic athletes moved to separate lodging accommodations and a separate training facility, as originally planned, and will continue their preparation for the Games. The entire delegation continues to be vigilant and will maintain strict protocols while they are in Tokyo."

Eaker is the first American to test positive for COVID-19 at the pandemic-delayed Olympics and is the fourth known case among athletes.

Perušič and his playing partner were due to begin their Olympic program on July 26 against opponents from Latvia.
Czech team leader Martin Doktor said in a statement they would ask to postpone the game until the infected player is cleared to play.

Perušič, who said he has been vaccinated, is the second member of the Czech delegation to test positive in Tokyo after a team official's case was reported Saturday.

He is the third athlete who was staying at the village to test positive. Two South African men's soccer players had their COVID-19 cases announced Sunday. 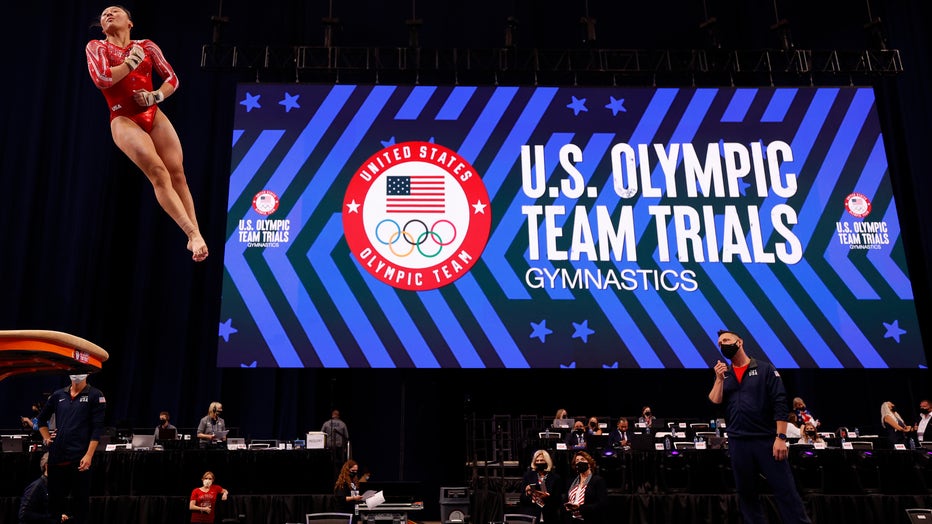 ST LOUIS, MISSOURI - JUNE 27: Emma Malabuyo warms up on the vault prior to the Women's competition of the 2021 U.S. Gymnastics Olympic Trials at America’s Center on June 27, 2021 in St Louis, Missouri. (Photo by Jamie Squire/Getty Images)

The players and a team video analyst who tested positive one day earlier were moved to the "isolation facility" managed by the Olympic organizing committee.

Their 21 close contacts around the South Africa team now face extra scrutiny before their first game Thursday against Japan in Tokyo. The monitoring regime includes daily testing, traveling in a dedicated vehicle, training separately from teammates not affected and being confined to their rooms for meals.

The conditions mean "although you are a close contact you are able to do the minimum that you need to do so that you can continue your preparation for the Games while you are being monitored," Pierre Ducrey, the Olympic Games operations director, said Monday.

Earlier Monday, before the Czech case was reported, Tokyo Olympic organizers confirmed three new COVID-19 cases, including a media worker arriving in Tokyo and Games staffer or official in the Chiba prefecture.

Both people, who were not identified, went into a 14-day quarantine, Games organizers said.

The Tokyo metropolitan authority reported 727 new COVID-19 cases Monday, which was the 30th straight day the tally was higher than one week earlier. The count was 502 last Monday.

The games open Friday with no fans in nearly all event venues, including at the opening ceremony, amid a state of emergency in Tokyo, and a slower than hoped for vaccine rollout. Japanese authorities said Monday 21.6% of the nation's 126 million population is fully vaccinated.

The total of Games-related infections is now 58 since July 1.

These resulted from 22,000 people arriving in Japan since July 1 with 4,000 of those staying in the village, Ducrey said.
Around 11,000 athletes are due to compete at the Tokyo Olympics through Aug. 8.
___