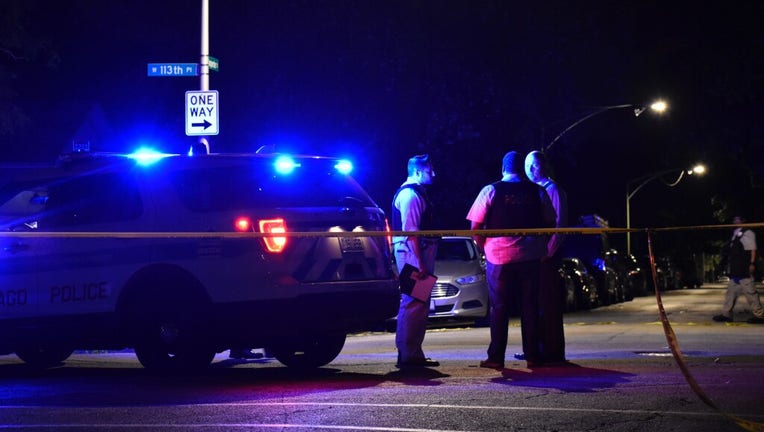 CHICAGO - At least four people have been killed and 12 others injured in shootings across Chicago since Friday evening.

The latest fatal attack left a man dead Saturday evening in Humboldt Park on the West Side.

The 31-year-old was sitting in a vehicle about 10:10 p.m. in the 900 block of North Lawndale Avenue when someone approached in a gray-colored vehicle and fired shots, Chicago police said. The man was struck in the chest and leg, and taken to Mount Sinai Hospital, where he was pronounced dead.

Earlier Saturday evening, a man was shot to death in Fuller Park on the South Side.

About 8:24 p.m., the 30-year-old was arguing with someone in the 100 block of West Swann Street when a fight broke out and the other person pulled out a gun and fired shots, Chicago police said. The man was struck in the leg and pronounced dead at the scene. A suspect was taken into custody.

A 32-year-old man was killed in a shooting Saturday afternoon in Roseland on the Far South Side.

He was sitting in a car about 4:30 p.m. in the 11400 block of South Calumet Avenue when someone pulled up in a vehicle and fired shots, Chicago police said. The man was struck in the back of the head and multiple times throughout his body. He was taken to Christ Medical Center in Oak Lawn, where he died.

Earlier Saturday, another man was killed in a shooting in Humboldt Park on the West Side.

Officers responding to a call of shots fired about 3:15 a.m. found the man facedown bleeding from multiple gunshot wounds in the 1300 block of North Harding Avenue, police said. He was taken to Mt. Sinai Hospital, where he was pronounced dead.

In non-fatal shootings, two people were wounded Sunday at a home in East Garfield Park on the West Side.

Officers responding to a call of shots fired about 3:35 a.m. found a 21-year-old woman lying next to the entrance of a home in the 3200 block of West Maypole Avenue, Chicago police said. The woman had been shot multiple times and was taken to Mt. Sinai Hospital in critical condition.

A 27-year-old man showed up to the hospital later with a gunshot wound to his thigh, saying he had been shot at the same location, police said. He was in good condition and refused to answer any more questions about the shooting.

Two people were wounded in a shooting Saturday morning on the South Side.

Officers responded about 11:40 a.m. to the 1100 block of East 87th Street and found a male with gunshot wounds to his chest and lower back, police said. He was taken to the University of Chicago Medical center. His condition was not immediately known.

Later, another male showed up at Trinity Hospital with a gunshot wound from the same incident, police said. His condition was stabilized.

Earlier Saturday morning, two Chicago police officers were injured after a man who was shot while driving in Lawndale slammed into their squad car.

About 10:33 a.m., a 20-year-old man was traveling in the 700 block of South Independence Boulevard when someone opened fire, striking him in the hand and chest, police said. The man continued driving, ignored a stop sign and crashed into a squad car.

Two officers in the car were taken to Stroger Hospital, where they were stabilized, police said. The man who was shot was taken to Mount Sinai Hospital in serious condition.

About 7:50 p.m., a 28-year-old man was in a home in the 7900 block of South Saginaw Avenue when someone walked up to him and fired shots, striking him in the ear and leg, police said. He was taken to the University of Chicago Medical Center in good condition.

At least six more people have been wounded in citywide shootings so far this weekend.

On Thursday, 12 people were shot throughout the city, two of them fatally.

Last weekend, 33 people were shot, seven of them fatally, in Chicago.