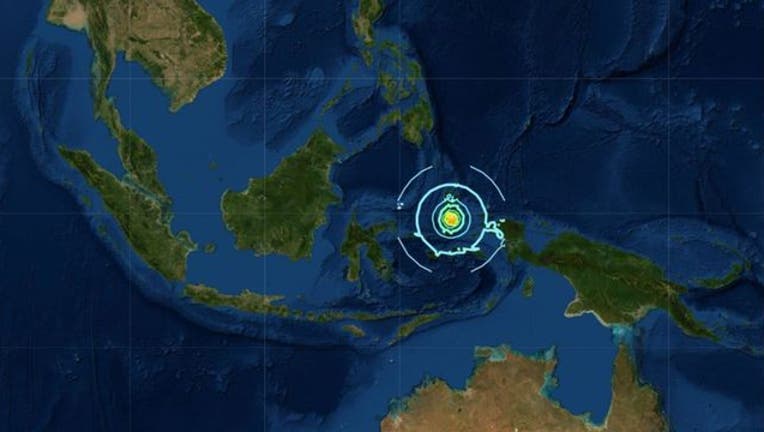 A 7.3 magnitude earthquake struck the Moluccas islands on Sunday, with the epicenter seen in the above picture. (USGS)

(FoxNews.com) - A 7.3 magnitude earthquake shook the Moluccas islands on Sunday, according to the U.S. Geological Survey, creating panic and causing damage to houses in eastern Indonesia.

The quake struck the Maluku Islands in the North Maluku province of Indonesia at a depth of six miles, but there were no reports of major injuries. The country's meteorology agency (BMKG) said there is little threat of a tsunami.

"There are no reports of infrastructure damage yet," Iksan Subur, an official with Indonesia's disaster mitigation agency located near the epicenter, told Reuters.

"But people panicked and ran out of their houses. Some people who live near the ocean are starting to move to higher ground," he added.

Indonesia is located on the so-called Ring of Fire, a major area in the Pacific Ocean where about 90 percent of the world's earthquakes occur. It's also home to nearly 452 volcanoes.

Last week, a 6.9 magnitude quake rocked the northeast shore of Sulawesi, located west of the area impacted on Sunday. BMKG originally issued a tsunami warning, but that was later lifted.

BMKG said Sunday's earthquake produced at least seven aftershocks, each stronger than 5 magnitudes and the main quake was felt throughout cities in the Sulawesi and Papua islands.

The quake occurred nearly 103 miles southeast of the provincial capital of Ternate and Subar added that several hundred people fled to shelter in government offices and mosques. While Indonesia has about 260 million people, the North Maluku area only has a population of around one million.

The most powerful earthquake to hit the area occurred in 2004 when a 9.5 magnitude quake triggered a huge tsunami that killed 226,000 people and 126,000 in Indonesia.

Just last year a tsunami killed thousands in the area of Sulawesi, but Indonesia's disaster mitigation agency said this quake won't have the potential to cause a tsunami.

The quake struck just hours after a 6.6 magnitude impacted Western Australia. The agency asks residents to remain calm and be on alert for more aftershocks.