Protesters have gathered outside of the White House to disrupt President Trump's renomination speech.

The Metropolitan Police Department (MPD) arrested people ranging in age from 18 to 37 early Friday, according to MPD data, after hundreds gathered around the White House on Thursday night during and after Trump’s Republican presidential nomination speech at the RNC. 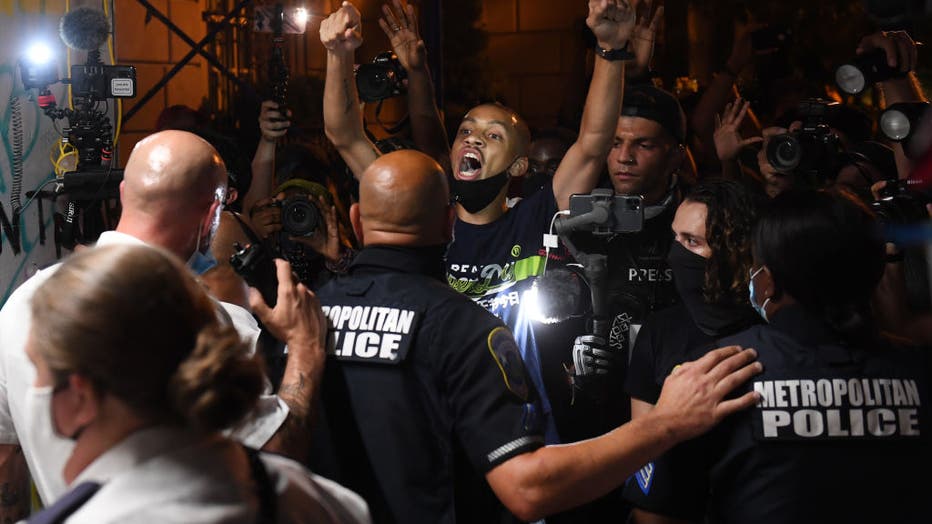 After the convention concluded, there were skirmishes as protesters yelled and threw water bottles at police at the historic St. John's Church near Black Lives Matter Plaza.

A crowd also enveloped Kentucky Sen. Rand Paul as he left the convention, yelling for him to say the name of police shooting victim Breonna Taylor, who was killed in his state.

RELATED: Sen. Rand Paul thanks DC cops for saving him from 'crazed mob' after RNC 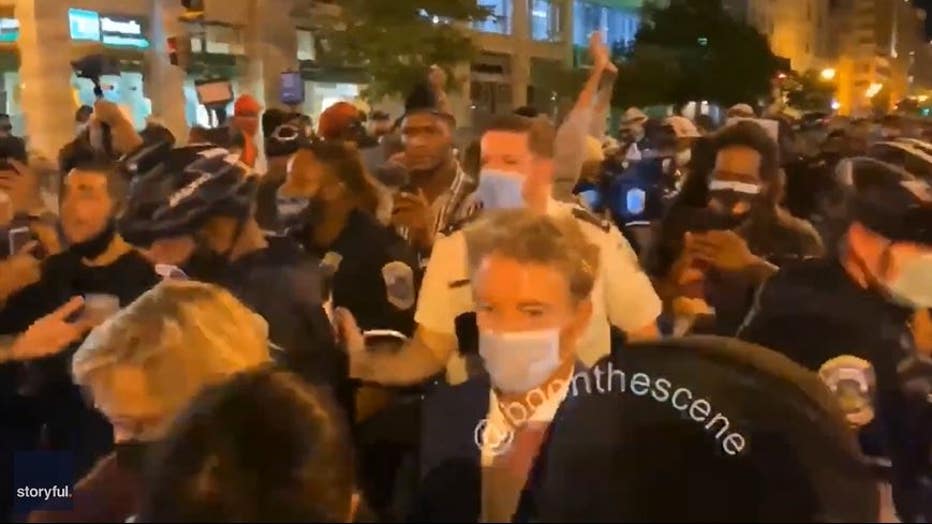 A crowd of protesters surrounded U.S. Sen. Rand Paul as he was leaving the White House following the Republican National Convention early Friday, shouting for the legislator from Kentucky to acknowledge the shooting of Breonna Taylor. (Credit: Brenda

Video posted online showed dozens of people confronting Paul, a Republican, and his wife, who were flanked by police officers, on a street after midnight. Protesters shouted “No Justice, No Peace” and “Say Her Name” before one appears to briefly clash with an officer, pushing him and his bike backward, sending the officer into Paul’s shoulder, as seen in moments captured on video.

The senator and his wife kept walking and did not appear to have been touched by any of the protesters or to have suffered any injuries.

During a Friday morning interview with "Fox & Friends," Paul recalled how he, his wife and two others were trying to make it back to their hotel when they were swarmed.

“They were shouting threats to us – to kills us, to hurt us – but they’re also saying, shouting, ‘Say her name. Breonna Taylor,'" he said. "You couldn’t reason with this mob, but I’m actually the author of the Breonna Taylor law to end no-knock raids, so the irony is lost on these idiots that they’re trying to kill the person who’s actually trying to get rid of no-knock raids. They were shouting and screaming – really these people were unhinged."

The groups ShutdownDC and Long-Live Go-Go had put out word in advance about the planned “noise demonstration and dance party” to coincide with Trump's speech.