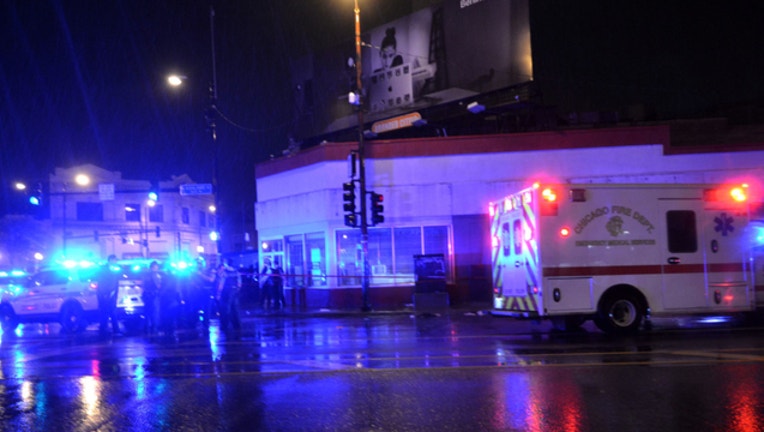 Police investigate a shooting about 4 a.m. Wednesday, August 29, 2018 in the 1500 block of West Division Ave. in Chicago. | Justin Jackson/ Sun-Times

CHICAGO (SUN TIMES MEDIA WIRE) - Nine people were wounded by gunfire between about 3:45 a.m. and 10:15 p.m. Wednesday in shootings across Chicago.

The most recent shooting happened in the West Elsdon neighborhood on the Southwest Side.

A 25-year-old man was driving his vehicle when a group of males got out of a white car and black SUV and fired shots about 10:15 p.m. in the 3800 block of West 51st, according to Chicago police.

He was shot in the hand and suffered a graze wound to the shoulder and was taken to Holy Cross Hospital where his condition was stabilized, police said.

A few minutes earlier, two people were wounded in a shooting in the Austin neighborhood on the West Side.

A man and woman were standing outside when a male fired shots at 10:07 p.m. in the 5300 block of West Huron Street, according to police.

The 29-year-old man was shot in his hip, his forearm and near his ribs. He was taken to West Suburban Medical Center by the woman, who suffered a graze wound to the head, police said.

The 39-year-old woman was being treated at the same hospital, where her condition had stabilized. The man was transferred to Stroger Hospital where his condition had also stabilized, police said.

The shooter was with two other males at the time of the incident, police said.

About 9 p.m., two men were shot in the Brighton Park neighborhood on the Southwest Side.

The pair was standing on a sidewalk just before 9 p.m. when a vehicle pulled up to the corner of 41st Street and Maplewood Avenue, and someone inside opened fire, police said.

A man was critically wounded in a West Side Lawndale neighborhood shooting at 5:38 p.m.

The 19-year-old was shot in the abdomen in the 800 block of South Kilpatrick, police said.

He showed up to Loretto Hospital and was transferred to Stroger Hospital for treatment, police said. He was in critical condition.

About an hour earlier, another man was shot in the Englewood neighborhood on the South Side.

The 28-year-old was walking about 4:20 p.m. in the 5600 block of South Shields when he heard gunshots and was struck in the ankle, Police said.

He was taken to University of Chicago Medical Center in good condition, police said.

About 2:40 p.m., a man was shot in the Lawndale neighborhood.

The 30-year-old was walking in the 800 block of South Keeler when a vehicle pulled up next to him and a rear passenger got out, according to police.

The passenger fired one shot, striking the man in the abdomen, police said. The man got himself to Stroger Hospital, where his condition was stabilized.

The first shooting of the day left a bouncer critically wounded in the Noble Square neighborhood on the West Side.

The bouncer, a 31-year-old man, got into an altercation with someone who took out a handgun and fired several shots at 3:44 a.m. in the 1500 block of West Division, police said. He was taken to Northwestern Memorial Hospital where he was in critical condition.

A weapon was recovered at the scene and police initially said a person of interest was being questioned.

Police said later Wednesday morning that no person of interest was being questioned and no one was in custody in connection with the shooting.

On Tuesday, one person was killed and 11 people were wounded.