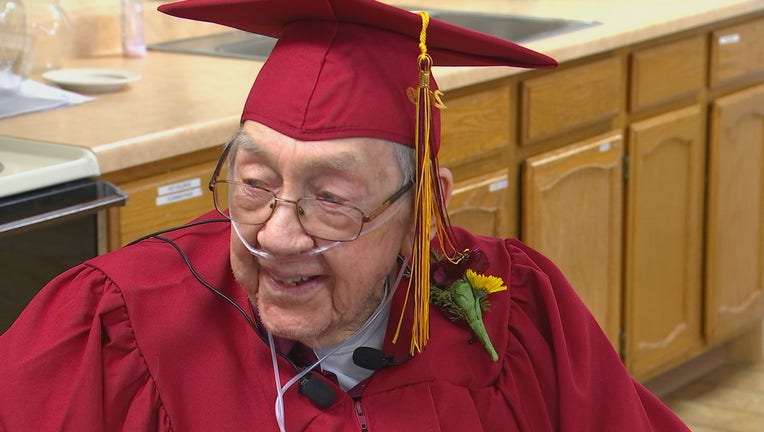 Clifford Hanson wasn't able to go to high school due to obligations on his family farm in the 1930s. Monday, at age 91, he received his diploma.

At Lake Ridge Care Center, Hanson accepted the honor with pomp and circumstance.

After dropping out of school to work on the family farm in the 1930s, Clifford Hanson received his diploma Monday.

As a young boy in the 1930s, Hanson was forced to choose between his education and helping his ailing father maintain the family farm.

“When you’re working on farmland, it took about 95 percent of your day,” Hanson said. “You had to do it otherwise you wouldn’t have anything.”

“He was so defined by this moment in his life and he didn’t feel like he fit in and it was just really holding him back,” said Tamara Pierre, of Lake Ridge Care Center.

Despite the setback, he persevered. Eventually, he was married and had a family of his own.

“I studied hard every day, even at night,” said Hanson.

“He taught himself how to read schematics and manuals and he invented things and he didn’t let this stop him,” said Pierre.

After learning of Hanson’s story through the staff at Lake Ridge, Benson High School made the rare move to honor him with a diploma. At age 91, Hanson showed it’s never too late to follow your dreams.

“Yes, I am proud,” Hanson admitted.

When Hanson first attended school, he only spoke Norwegian. In the late 1950s, he moved to St. Paul and eventually became a certified welder before retiring.