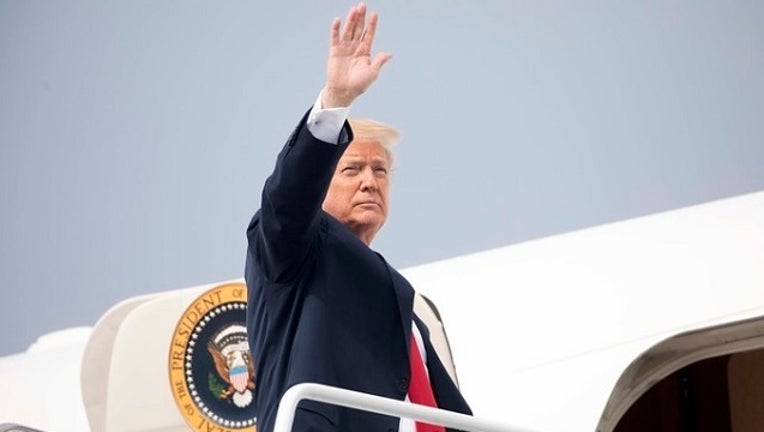 BERKELEY HEIGHTS, N.J. (AP) -- A family separation crisis of his own making continues at the border. His Environmental Protection Agency chief just quit amid mounting scandals. And he's about to meet with an adversary accused of meddling in the 2016 election.

But President Donald Trump has every confidence that on Monday night, the nation's attention will be right where he wants it.

After more than a week of pitched speculation, Trump will go on prime-time television to reveal his choice to fill the Supreme Court seat vacated by retiring Justice Anthony Kennedy, selecting a conservative designed to rally Republican voters in a midterm election year. And with that, the optics-obsessed president will be in his comfort zone -- taking center stage in a massive show.

Nearly 18 months after Trump set in motion Justice Neil Gorsuch's nomination, the reality star-turned-president is more seasoned, more embittered and increasingly comfortable exerting his will over the machinery of government and his own staff. His upcoming "Supreme" show is the latest example of Trump's push to remake the federal bench with young conservative judges, a crusade he believes will energize GOP voters concerned about the state of the judiciary.

Trump is largely following the same playbook this time as when he successfully rolled out Gorsuch's nomination in January 2017. White House aides have strict instructions to keep information under wraps so Trump himself can make the big reveal. The president was gleeful when Gorsuch's name didn't leak out early.

"So was that a surprise?" Trump said, after announcing his decision.

Still, there are differences this time. In the last go-around, the White House relied heavily on outside consultants to push Gorsuch over the finish line. Despite a staff exodus that has left key vacancies across the West Wing, the White House this time is retaining more control over the nomination and confirmation processes. A war room of communications, legal and research staff has been assembled in the Eisenhower Executive Office Building to promote and defend the nominee.

Trump has reveled in building up suspense in the days leading up to his speech, offering fragments of information here and there but strategically keeping the guessing game alive. Drawn from a public list of 25 candidates approved by conservative groups, the president's top contenders include federal appeals court judges Brett Kavanaugh and Raymond Kethledge, with judges Amy Coney Barrett and Thomas Hardiman still considered in the mix. The White House has been preparing confirmation materials on all four.

Speaking to reporters Thursday on Air Force One, Trump was coy.

Past announcements of Supreme Court nominees were not made in prime time. President Barack Obama announced the selection of Justices Elena Kagan and Sonia Sotomayor from the White House during the day.

More than 33 million viewers watched Trump announce Gorsuch last year. The audience edged the 31.3 million who watched Obama's final State of the Union address but was dwarfed by the 56.5 million who saw Obama announce the killing of Osama bin Laden in 2011, among the decade's most-watched presidential speeches.

The theatrics surrounding Trump's court selection should come as no surprise. His presidency is rife with made-for-TV moments. With Trump, a Cabinet meeting becomes a freewheeling speech to the nation, and a walk to Marine One turns into an impromptu news conference. He recently strode out the door of the White House to participate in a Fox News live broadcast from the driveway. And his Singapore summit with North Korean leader Kim Jong Un was staged as a massive media event.

"Everything Trump does gets more sensational than with past presidents," said Jeffrey McCaul, a communications professor at DePauw University. "I'm sure he's hoping for a huge prime-time audience, and he'll probably get it."

Theatrics aside, advisers stress that Trump's judicial selection process has been serious. He interviewed six top prospects and has been reviewing his options with lawmakers and outside advisers. In addition, Vice President Mike Pence met in person with Kethledge, Barrett and Kavanaugh, said a person familiar with the process who was not authorized to speak publicly and spoke on condition of anonymity.

In an administration light on policy achievements, the president often views media attention -- and positive headlines -- as a victory unto itself.

But Trump recognizes that the court pick offers both sizzle and substance, giving him the opportunity to tip the balance on the court toward conservatives for decades.

Douglas Brinkley, a history professor at Rice University, said the nomination has the added benefit of dominating the news, potentially overshadowing coverage of migrant children separated from their parents at the border.

Said Brinkley: "It's been a tough summer until this gift that Kennedy gave him."