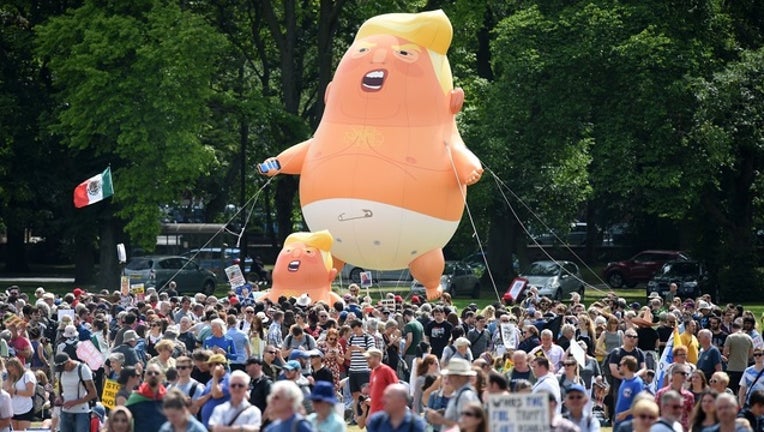 The balloon made waves outside the Houses of Parliament in London last week as President Trump visited U.K. Prime Minister Theresa May.

Didier Jimenez-Casto, an activist from Hillsborough, New Jersey, has banded together with local organizers in an effort to have the balloon shipped to the U.S.

The “Fund To Bring Baby Trump To America” raised nearly $6,200 as of Monday morning, more than its original $4,500 goal. Jimenez-Castro hopes to fly the balloon at the Trump National Golf Club in Bedminster.

The activist expects to receive the 20-foot tall balloon by mid-August.

The diaper-clad infant, with a quiff of hair and a mobile phone for tweeting, was the centerpiece of demonstrations in London.

"Depicting Trump as a baby is a great way of targeting his fragile ego, and mocking him is our main motivation," said Matthew Bonner, one of the organizers of the balloon flight. "He doesn't seem to be affected by the moral outrage that comes from his behavior and his policies. You can't reason with him, but you can ridicule him."

Some Americans living in London came to see the balloon, wearing the Stars and Stripes draped over their shoulders. Other spectators just came to take pictures as the balloon floated overhead for two hours.

"It's a very British way of protesting — we don't like to throw stones," said Phil Chapman, 59, of Hayfield, a village in Derbyshire. "It's far easier to protest in a pleasant way. If you can do that with humor, you will get more attention."

Trump criticized London Mayor Sadiq Khan, who refused to prevent the balloon from flying, in an interview published Friday.

Khan, who has been a target of Trump's ire before, said his job was to make sure the protests were peaceful, not to be a censor or the "arbiter of good taste."

"The idea that I would stop a blimp or a balloon flying over London because it may cause offense, and thereby curtail the rights people have to protest when it's not unsafe, it's not unpeaceful, I think people would find a bit astonishing," Khan told the BBC.