KENOSHA, Wis. - Some residents in Kenosha fear a planned visit by President Donald Trump after unrest over the police shooting of Jacob Blake may stir more emotions and cause more violence and destruction in the southeastern Wisconsin city after several days of peace.

The city’s mayor, and the state’s governor, also said they believed Trump’s visit comes at a bad time. But others welcomed the president’s trip, scheduled for Tuesday, when he will tour damage and meet with law enforcement. Trump’s visit comes as demonstrators are calling for the officer who shot Blake to be fired and face attempted murder charges, and more than a week after authorities say a 17-year-old from northern Illinois shot and killed two protesters.

The tension began Aug. 23 after a video showed a Kenosha police officer shooting Blake, a Black man, in the back while responding to a call about a domestic dispute. All last week, Black Lives Matter protesters held events to call for changes to policing. Democratic Gov. Tony Evers called a special session of the Legislature for Monday to take up a host of police reform measures, but Republicans took no immediate action.

Authorities said they had resources in place to protect the bedroom community between Chicago and Milwaukee, including more than 1,500 National Guard members.

Kenosha County Sheriff David Beth said more than 200 people have been arrested since the protests began. Of those, more than half were from outside. Kenosha, he said. Many arrests were for curfew violations, and included possible charges for burglary, possession of illegal drugs and carrying concealed weapons without a permit, officials said. The Kenosha Police Department has said more than 20 firearms were seized. 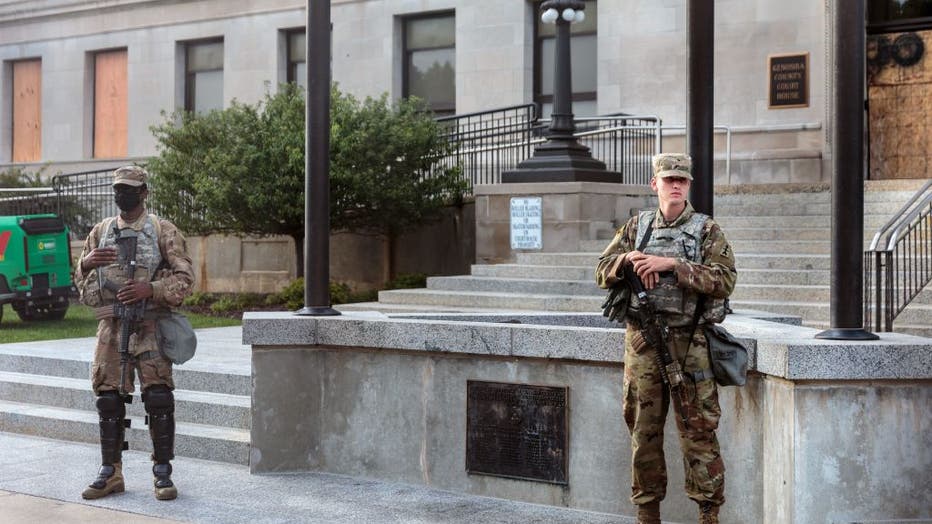 .Two cadet National Guardsmen stand outside the Kenosha Courthouse during curfew in Kenosha, Wisconsin on August 31, 2020, following the shooting of Jacob Blake by police (Photo by Kerem Yucel / AFP) (Photo by KEREM YUCEL/AFP via Getty Images)

Beth also said that “outside agitators” have used social media or made phone calls to churches and businesses to scare people and spread false rumors.

“I want the people of Kenosha to know there’s a huge amount of resources here to protect you,” Beth said.

Family members say Blake, 29, is paralyzed, and a lawyer said most of his colon and small intestines were removed. His family led a large peaceful protest Saturday, just before Trump announced his plans to visit.

White House press secretary Kayleigh McEnany said Monday that Trump has no immediate plans to meet with Blake’s family when he’s in Kenosha.

Trump told reporters Monday that he spoke with the Blake family pastor about speaking with the family, who insisted that their lawyer take part in the phone call.

Ben Crump, an attorney for Blake’s family, told CNN that Blake’s mother “was ready to receive the phone call, but for some reason the call never came, and we now understand why.”

“I don’t know why the president wouldn’t want the family to have their lawyers on the phone,” Crump said. “He seems to have lawyers with him when he talks to people.”

“We don’t need more pain and division from a president set on advancing his campaign at the expense of our city,” said uncle Justin Blake in a statement. “We need justice and relief for our vibrant community.”

On Sunday, Evers sent Trump a letter urging him not to come, saying the visit “will only delay our work to overcome division and move forward together.” But Kenosha County Board supervisors urged him not to cancel.

“Kenoshans are hurting and looking for leadership, and your leadership in this time of crisis is greatly appreciated by those devastated by the violence in Kenosha,” a letter from seven supervisors said.

“I think that Kenosha, at this present time, needs peace and needs to heal and needs people to allow us to do that,” he said.

Trump showed no signs of backing down, tweeting about the unrest in Kenosha and saying, ” I will see you on Tuesday!”

Diana Kreye, a 60-year-old resident of nearby Brighton, said Trump is exploiting the conflict.

“I don’t like that this has all become political,” said Kreye, an undecided voter.

Angel Tirado, 42, however, thinks Trump’s visit could help. “I hope he says something that can calm us all down,” said Tirado. “Maybe he’ll bring us together.”

Others doubt the president had any intention of closing divisions and pointed to his recent tweets and history of making racist comments.

“He’s not coming down here to heal,” said David Sanchez, 66, a retiree and Kenosha resident who expects thousands of people to show up to protest Trump. “He’s coming to Kenosha to start more trouble. I don’t care what he says.”

“He has done nothing over the last three years to bring people together,” said Raymond Roberts, 38, a data scientist and Afghanistan War veteran. “This is a bellwether county in a bellwether state. It’s all about his reelection.”

Trump has throughout the summer sought to cast U.S. cities as under siege by violence and lawlessness, despite the fact that most of the demonstrations against racial injustice have been peaceful.

Still, Trump is likely to find some support in a county he won in 2016 by fewer than 250 votes.

Oscar Escobar, 41, a Kenosha resident who owns a moving company and co-owns a bar and grill, said he doesn’t align with either Democrats or Republicans. He said it’s good that Trump plans to visit.

“I think it’s a great thing for him to show that he cares about what’s happening here in Kenosha and not turning his back on us and just leaving us alone,” Escobar said.