Americans went to a library more than movie theaters, concerts

A recent Gallup Poll found that Americans - especially women, people in low-income households and young adults - visited a library more often than going to the movies or attending a concert.

WASHINGTON - Americans - especially women, adults in low-income households and young adults - visited a library more often than the movies, sporting events and concerts in 2019, according to a recent Gallup Poll.

Gallup polled 1,025 adults age 18 and older from all 50 states including Washington D.C. The questionnaire was done from Dec. 2-15 as an update to a December 2001 survey.

“Visiting the library remains the most common cultural activity Americans engage in, by far,” the survey results stated.

On average, adults took about 10.5 trips to the library in 2019. That number exceeded the average participation in eight other common leisurely activities: going to the movies, attending a sporting event, attending a concert or theater production, visiting a national or historical park, visiting a museum, visiting a casino, going to an amusement or theme park and visiting a zoo.

The results showed that Americans with higher household incomes often did more activities but visited libraries the least. Libraries were visited most often by adults in low-income households.

“The widest gaps between high- and low-income households are in reports of attending a live sporting event, a live music or theatrical event, a museum and going to the movie theater – all things often associated with significant ticket prices,” according to the survey. 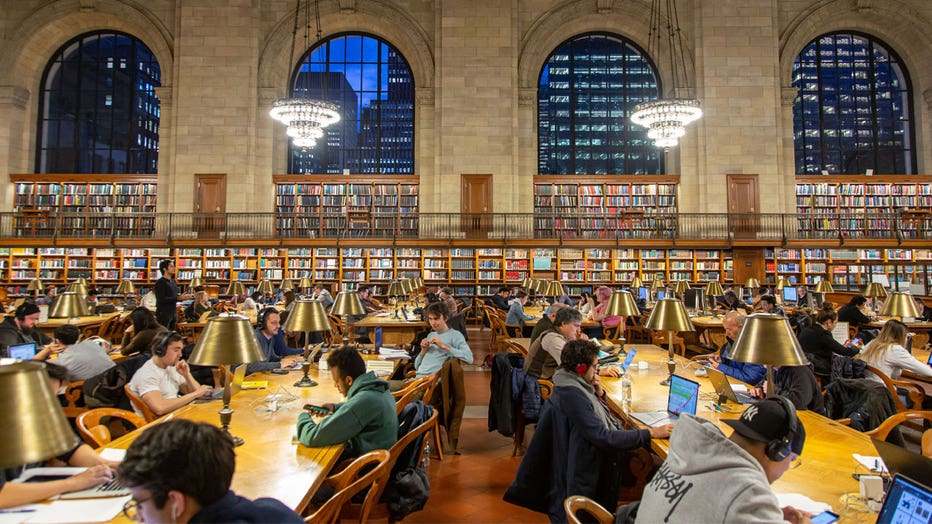 A file image shows the inside the main reading room of the New York Public Library. (Photo credit: Getty Images)

Women also appeared to visit libraries twice as much as men, according to survey data. On average, women visited 13.4 times a year compared to men at 7.5 visits. But men visited casinos, attended sporting events or went to national parks more than women.

The survey found that adults in the 30-49 age group were the most active although they ranked second in terms of trips to the library.

The age group with the most visits to the library at an average of 15.5 were adults 18-29 and adults 50-64 had the least amount of visits at 6.8. Oddly enough, the youngest age group also visited casinos the most at 4.4 times on average.

Visiting a library was also more frequent by a very slight margin for people without children than those with children at 10.8 and 10.1 average visits, respectively.

“Many factors determine how Americans spend their free time, and financial means is a key factor. Age, too, is a large determinant,” according to the survey.