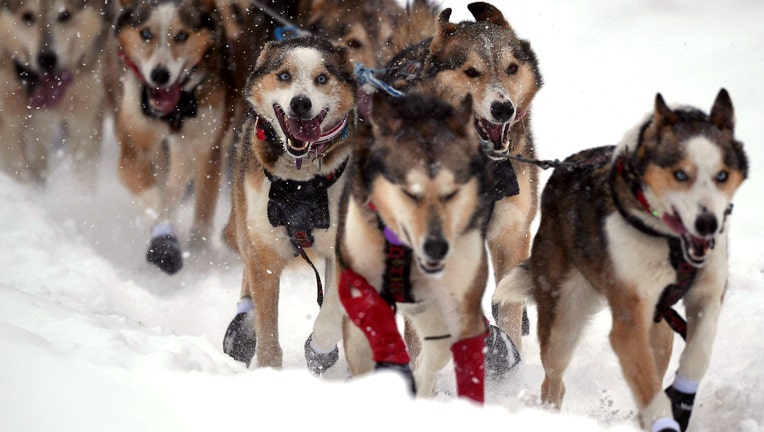 ANCHORAGE, Alaska - As Iditarod mushers drove their dog teams across Alaska on Saturday, race officials scrambled to make last minute changes prompted by concerns over the new coronavirus, including asking fans not to fly to Nome for the finish.

Officials late Friday night urged race fans, especially those from out of state, to skip the finish this week. City officials in Nome followed most other Alaska cities in closing or limiting access to most public buildings in wake of the state's first positive test, that of a man from outside the United States. The man was tested Thursday at an Anchorage hospital after earlier arriving in the city on a private cargo plane.

"The Iditarod fully appreciates and is humbled by the passion and social energy of the Iditarod nation; however, we are asking you to not make any nonessential travel to the Nome finish, in particular, those who are traveling from outside of Alaska," according to a statement from the Iditarod.   Race officials are also paring down their own staff to only essential personnel needed in Nome for the finish. That list is limited to veterinarians, necessary dog handlers and staff needed for communications and to coordinate logistics.

The Iditarod had previously postponed post-race events in Nome, including the musher's banquet and an annual meet-and-greet with mushers.

Race Marshal Mark Nordman told the Anchorage Daily News that he didn't know how a race like the Iditarod could be canceled, but said continuing the race was being done under the guidance of state officials.

"If the state of Alaska said the race must stop, we'd stop," Nordman told the newspaper. "We have not heard that."

The vast majority of people recover from the new virus. According to the World Health Organization, people with mild illness recover in about two weeks, while those with more severe illness may take three to six weeks to recover. More than 80,000 people in China have been diagnosed with the coronavirus. More than 65,000 have recovered.

Iditarod officials were also scrambling to move checkpoints away from villages where mushers stop en route to Nome. Many times village schools are used as checkpoints or a place to allow a musher to rest but the Bering Strait School District, which includes many communities that serve as checkpoints, closed facilities and said it would not host Iditarod activities.

Jessie Royer of Fairbanks was leading the race Saturday. The Idaho native who was raised in Montana is vying to become the first woman in 30 years to win the Iditarod. The last woman to win the race was the late Susan Butcher, who won her fourth Iditarod in 1990.

Royer arrived first at the checkpoint in Nulato Saturday. The checkpoint in this village of about 360 and originally founded in 1838 as a Russian trading post is normally the community hall, and the school is also widely used.

"Because the school in Nulato was not available, the Iditarod changed its checkpoint location to on the Yukon River," Nordman said in a statement. "All supplies are in place and the checkpoint is fully manned."

Another community closer to Nome is also off limits this year because of concerns over the virus. The Iditarod, in consultation with community leaders in Shaktoolik, decided to bypass the community and set up the checkpoint outside town.

Food that mushers have flown to the checkpoint will be moved to the new location, along with straw for dogs to bed down. Provisions are being made to allow the teams to get a hot meal before getting back on the trail.

The race started Sunday in Willow for 57 mushers, down to 53 after four withdrew, including Nils Hahn and Alan Eischens on Friday morning. The winner of the nearly 1,000-mile (1,600-kilometer) race across Alaska is expected in the town of Nome, on the Bering Sea, sometime next week.