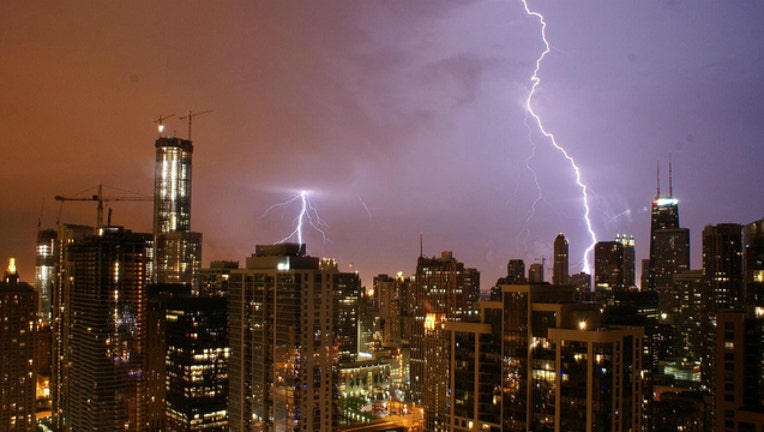 CHICAGO (AP) - Illinois officials and residents began assessing damage Thursday after eight tornadoes damaged rural communities in the northern part of the state amid powerful storms that swept across the Upper Midwest.

The National Weather Service said an EF2 tornado with estimated top wind speeds of 115-125 mph cut a path more than 11 miles long and about four football fields wide into the city of Pontiac on Wednesday night. Officials said at least seven people were injured in that tornado.

"We are fortunate things are not worse and are thankful there were no fatalities," Illinois Gov. Bruce Rauner said in a Thursday morning statement.

In the Pontiac area, about two dozen homes — 10 to 15 outside of the city and 13 within the city limits — and nine commercial businesses were damaged, according to Pontiac Fire Chief Scott Runyon.

"Most of the residential reports ranged from minor shingle damage and tree damage, to pretty extensive window repair and holes, but trees did most of the damage to the residential homes," Runyon said during a news conference, The Daily Leader newspaper in Pontiac reported.

"Some of the commercial buildings were reporting relatively minor damage, but the majority of the reports are fairly severe. It's going to take a great deal of money to get these repaired," Runyon said.

The storm system produced dime-sized hail in some areas, and its high winds snapped trees, blew roofs off buildings and downed power lines. The weather service reported winds from 80 mph to 100 mph in some parts of northern Indiana.

The northwestern Indiana town of Brookston, among those buffeted by the high winds, declared a state of emergency Thursday after the entire town lost power. WLFI-TV reported two state highways in the town were blocked by storm debris, and authorities were warning people to avoid the area.

"The wind was so ferocious you couldn't have stood out in it at all," Brookston resident Steve Hall told WLFI. "This tulip (poplar) tree behind me was a healthy young tree and (the wind) just twisted it and laid it over like a pretzel."

A 100 mph wind gust was recorded in the nearby town of Battle Ground, the weather service said.

Firefighters responded to reports of people trapped in a house in Seneca, Illinois, after a tornado moved through the village about 70 miles southwest of Chicago. No injuries were reported.

Jeff Maierhofer said he huddled in a basement with his wife, two children and seven neighbors when the storm arrived. He said his farm was badly hit.

"Nobody's hurt. Everybody's fine. All the neighbors are fine. Everybody checked in with everybody. But there's a lot of damage," Maierhofer told WLS-TV.

In nearby Serena, Nate Hermann said he drove his pickup truck around 10 square miles and found farmland "wiped out everywhere."

A strong band of thunderstorms forced a two-hour delay in Chile's 2-0 victory over Colombia in the Copa America semifinal at Soldier Field, the home of the Chicago Bears football team. Fans sheltered beneath the stands until the danger passed. Fans also were told to take shelter at Target Field, home of the Minnesota Twins, before their game against the Philadelphia Phillies resumed after a 70-minute delay.