Man claims he was trying to help manatee

Charter boat captain David Beede says he was trying to help a manatee by poking it with his fishing pole and the high-five he gave another person on the boat afterward was misunderstood.

See Through Canoe Company posted drone video to social media of the incident, which happened near the Gandy Bridge on the Weedon Island Preserve side.

The video appears to show a man using a pole to poke at one of several manatees in the water, scaring the animal. The rest of the manatees could then be seen splashing in what the videographer said was panic, causing them to swim away.

The man could be seen high-fiving another person on the boat after startling the manatees. The videographer said the man then tried to use a fishing pole to snag the drone that he used to record the incident.

See Through Canoe said they turned the video over to the Florida Fish and Wildlife Conservation Commission.

Drone video taken near the Gandy Bridge in Pinellas County appears to show a charter boat captain poking at a manatee with a pole, startling the group of sea cows in the shallow water.

"They literally responded in less than a minute when the video was initially sent to them," the videographer told FOX 13. "They are clearly taking it very seriously and are totally on top of it."

FWC confirmed they are investigating the matter.

FOX 13 spoke with the boater involved, who claimed this was all a misunderstanding.

Charter boat captain David Beede told FOX 13 he had spotted something on the manatee's back that appeared to be a piece of string or a net and tried to get the item off of the manatee with a fishing pole.

”There was a white little string on the manatee, so I was like, 'Maybe I could rub it off,'" Beede explained. “Would I ever try to rub something off on the back of a manatee again? No, I would not."

When asked why he high-fived another person in the boat after the manatees became startled, he said it was because they'd gotten splashed by the animals.

“Everything in my business is geared towards safety first and protection of the environment,” Beede said. “I’m not out to hurt the manatees, that's for sure, my clients love to see them.” 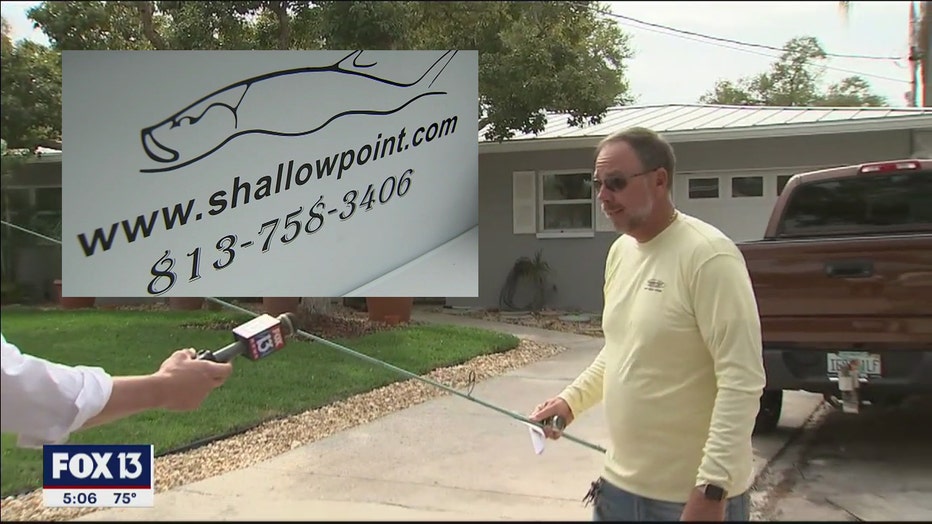 Beede then said he spotted the drone and felt the operator was harassing him, so he used his fishing pole to try to get it to go away.

“It’s very annoying, very intrusive, in my opinion, it’s an invasion of privacy and clients are asking what the heck is going on,” he said.

Manatees are protected under federal law by the Marine Mammal Protection Act of 1972 and by the Endangered Species Act of 1973, which makes it illegal to harass, hunt, capture or kill any marine mammal, the agency said.

The animals are also protected by the Florida Manatee Sanctuary Act of 1978, which states: "It is unlawful for any person, at any time, intentionally or negligently, to annoy, molest, harass, or disturb any manatee."

Anyone convicted of violating the state law faces a possible maximum fine of $500 and could be imprisoned for up to 60 days. Conviction on the federal level is punishable by a fine of up to $50,000 and/or one year in prison, FWC said.