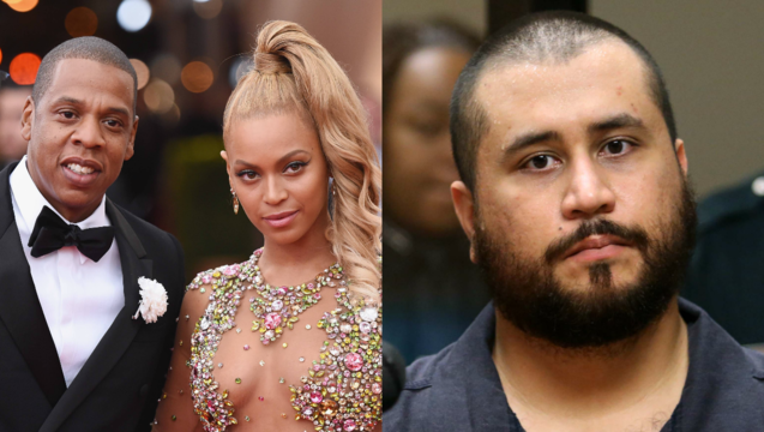 (FoxNews.com) - George Zimmerman is being accused of sending threatening texts aimed at Beyoncé and Jay-Z over the rap mogul’s new Trayvon Martin documentary, according to a report.

The neighborhood watch volunteer acquitted of fatally shooting the unarmed teen in 2012 called Jay-Z “a b----” and Beyoncé “a broke w----” in text messages to a private investigator, The Blast reported Friday.

“If I see either of them in my life, they’ll find themselves inside a 13-foot gator,” Zimmerman wrote when contacted by private investigator Dennis Warren for “Rest in Power: The Trayvon Martin Story,” the news outlet reported.

The messages to Gasparro included his home address and told him members of a notorious New York City Mafia family were looking for him, The Blast reported.

Neither Beyonce nor Jay-Z have yet to respond to the alleged threats.

The Beyhive flocked to Twitter after news of Zimmerman's texts emerged, US Weekly reported.

“George Zimmerman threaten Beyoncé which means he should end up missing within the next 48 hours,” one tweet said. “Hive y’all know what to do.”

The magazine reported that another tweeted “GEORGE ZIMMERMAN REALLY THINK HE FINNA COME FOR BEYONCÉ?!!!! BEYONCÉ??????????????”

Zimmerman was charged with stalking Warren in May in Seminole County, Fla.

Warren told investigators that in one text Zimmerman told him, "I know how to handle people who [expletive] with me, I have since February of 2012." A news article about the documentary was attached to the text.

"Anyone who [expletive] with my parents will be fed to an alligator," Zimmerman also told Warren, according to investigators.

The final episode of the six-part documentary airs Monday at 10 p.m. ET on the Paramount Network.