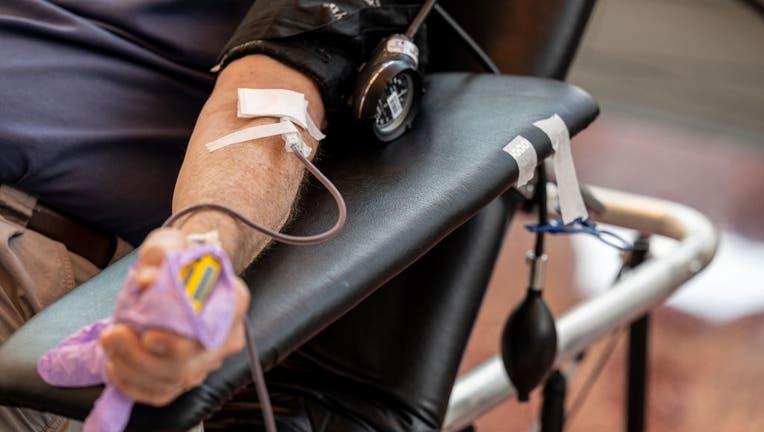 LOUISVILLE, KY - JULY 07: A mans arm rests on the donation table arm rest while donating blood at the KFC YUM! Center during the Starts, Stripes, and Pints blood drive event on July 7, 2021 in Louisville, Kentucky. Rising numbers of organ transplants

A British blood donor said he was turned away after refusing to answer a question asking if he was pregnant, citing that he is a man in his 60s, according to reports.

Leslie Sinclair, 66, told the Daily Mail he has given 125 pints of blood over the past five decades. But on his last trip to a clinic in Stirling, Scotland, he was told to fill out a form that asked if he was expecting a child or had been pregnant in the past six months.

After noting that he is a male, the clinic staff said they could not accept his blood unless he provided an answer despite a push by officials to attract new blood donors.

All potential donors are asked the question to "promote inclusiveness" and because pregnancy is not always visually clear, according to the report.

"I am angry because I have been giving blood since I was 18 and have regularly gone along," the father of two told the Daily Mail. "I'm very happy to do so without any problem.

"There is always a form to fill in and that's fine – they tend to ask about medical conditions or diseases – and clearly that's because the blood needs to be safe," he added. "This time around, there was a question I hadn't seen before: 'Are you pregnant, or have you been in the last six months?' which required a yes or no answer."

In response to the incident, Marc Turner, director of the Scottish National Blood Transfusion Service, defended the pregnancy question.

"We appreciate the support of each and every one of our donor community and thank Mr Sinclair for his commitment over a long number of years.

"As a public body we take cognizance of changes in society around how such questions may be asked without discrimination and have a duty to promote inclusiveness – therefore all donors are now asked the same questions."