MTA bus dangles from overpass in the Bronx

An MTA bus was left dangling off of an overpass in the Bronx late Thursday night after the driver lost control and crashed through the guardrail leaving it nearly split in half.

NEW YORK - A bus in the Morris Heights section of the Bronx careened off a road late Thursday night and was left dangling from an overpass seriously injuring the driver, police said.

The 55-year-old driver broke his jaw in the crash and refused to submit to a drug and alcohol test after arriving at the hospital, authorities said.

The BX 35 articulated bus crashed just after 11 p.m. Thursday at the interchange between the Cross Bronx and Major Deegan expressways. 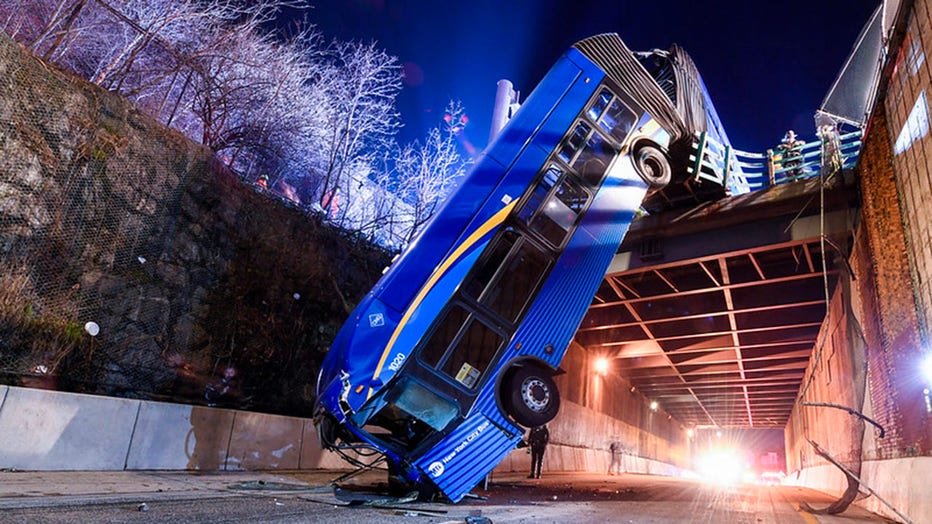 ​An articulated MTA bus crashed just after 11 p.m. at the interchange between the Cross Bronx and Major Deegan expressways. (Marc A. Hermann / MTA) ​

One part of the tandem bus remained on the bridge, with the other half dangled nearly completely vertical, with its smashed front end resting on the highway ramp below. At about 6 a.m., crews were able to raise the front portion of the bus off the Cross Bronx Expressway and back onto the overpass and University Avenue.

Eight passengers suffered minor to non-life-threatening injuries, according to the FDNY. The passengers and the driver were taken to hospitals for treatment.

MTA officials are investigating the cause of the crash, focusing on the speed the bus was traveling at the time.

"We know the bus was going between 17 and 26 miles per hour at the time of the incident," said MTA Chief Safety Officer Patrick Warren. "But the appropriate speed for taking a turn such as this is between 3 and 4 miles per hour."

The driver of the bus tried to make a left turn off University Avenue and onto a ramp towards the Washington Bridge when the bus veered off the elevated road and landed face-down onto the Cross Bronx Expressway, said officials on the scene.

The rear portion of the bus remained on the Cross Bronx.  No cars were passing beneath the overpass at the time of the crash.

"The bus fell approximately 50 feet onto the access road. The patients suffered injuries consistent with a fall from such a great height," Deputy Fire Chief Paul Hopper said in a social media post. 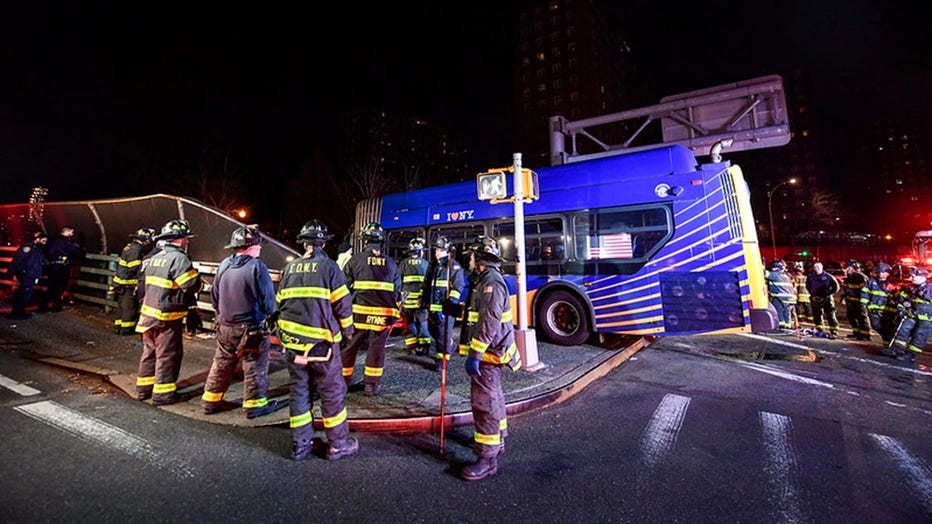 ​An MTA bus hangs from an overpass in the Bronx. (Marc A. Hermann / MTA) ​

Firefighters secured the fuel and other hazardous materials before attempting to pull the bus fully onto the road, Acting Battalion Chief Steven Moore said in the post.

In one such attempt, a chord on the crane truck snapped at about 4:30 a.m.

An BX 35 bus careened off an overpass and landed partially onto the Cross Bronx Expressway. The front portion was raised back onto the elevated road Friday morning.

No other vehicles were involved in the crash.

"The MTA’s goal is to have the safest transportation system in the nation, and when an incident like this occurs we take it very seriously," said MTA Chief Safety and Security Officer Patrick Warren. "We are conducting a full investigation and will implement lessons learned in order to prevent it from happening again. We are certain this was a terrifying incident for those customers on the bus. Our hearts go out to them with hope that they can recover quickly."

The driver, whose name was not released, was driving his regular route. He has more than 11 years of service and a good safety record, the MTA said. The driver passed a breath test at the scene of the crash but then refused to submit to a later drug and alcohol test at the hospital, said Patrick Warren, the MTA’s chief safety and security officer.

The MTA said Friday that the cause of the crash was likely not a mechanical issue, as the bus had been recently inspected on January 13 and no mechanical issues were found.

"This is a horrible crash and we are leaving no stone unturned in our effort to figure out what happened," said Craig Cipriano, President of MTA Bus Company and Senior Vice President for Buses, New York City Transit. "We have launched a full investigation into what happened in close coordination with the NYPD and FDNY." 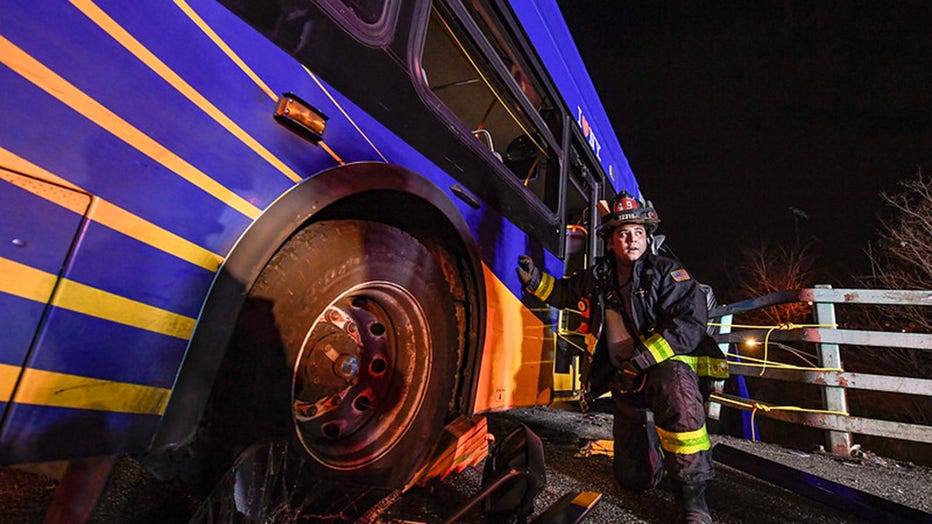 ​An articulated MTA bus crashed just after 11 p.m. at the interchange between the Cross Bronx and Major Deegan expressways. (Marc A. Hermann / MTA) 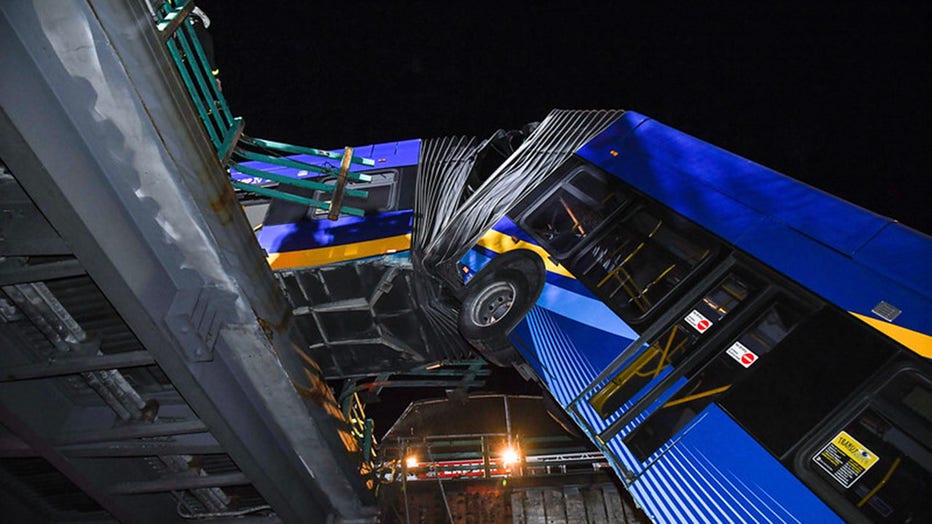 An MTA bus hangs from an overpass in the Bronx. (Marc A. Hermann / MTA) 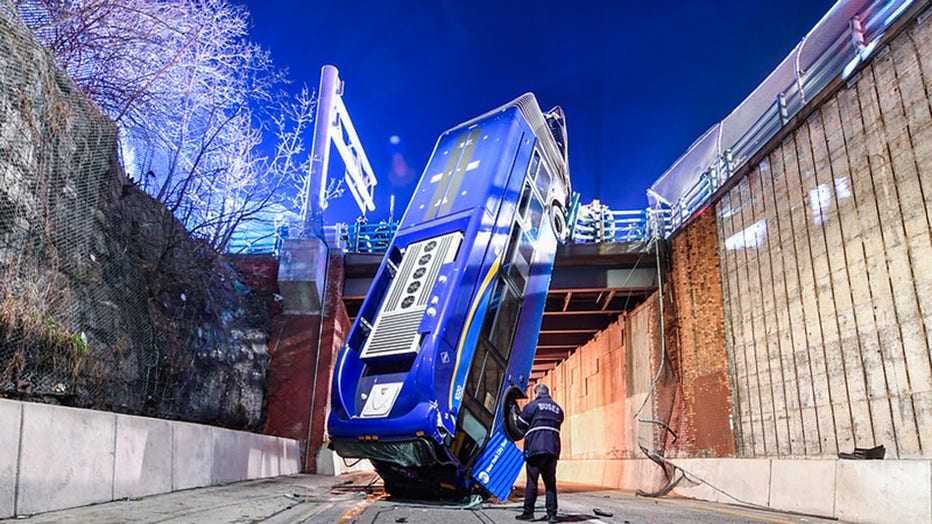 An MTA bus careened off a road in the Bronx and was left dangling from an overpass seriously injuring the driver. (Marc A. Hermann / MTA) 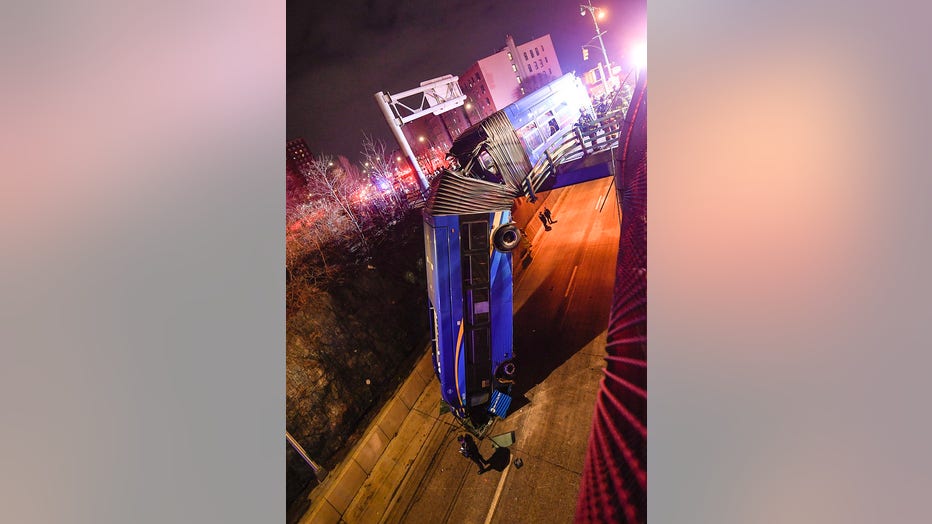 ​An articulated MTA bus crashed just after 11 p.m. at the interchange between the Cross Bronx and Major Deegan expressways. (Marc A. Hermann / MTA) ​

An MTA bus crashed through a barrier and hangs from an overpass in the Bronx.