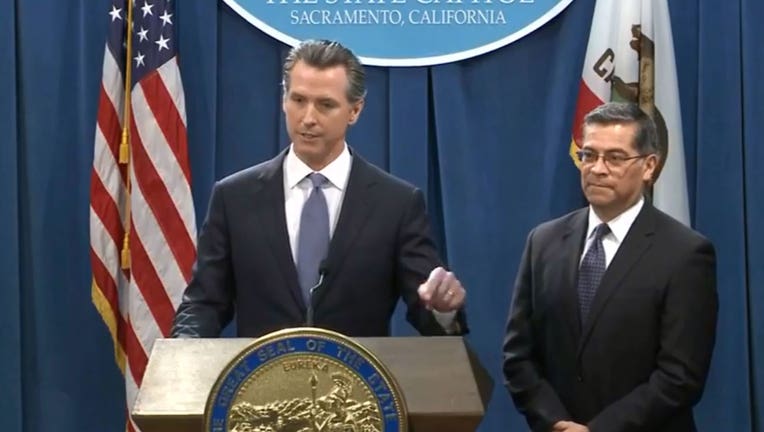 SACRAMENTO, Calif. - California's governor revealed a spending plan on Friday that puts a new tax on vaping, gives $20,000 to teachers who commit to working in high-needs schools and gives taxpayer-funded health benefits to older adults living in the country illegally.

Gov. Gavin Newsom's $222 billion proposed state budget increases spending by 2.3% or about $5 billion, but it also would boost state reserves to $21 billion in case of an economic downturn. In addition, the state would get $107 billion from the federal government for various programs.

Newsom detailed his proposal for nearly three hours on Friday, lauding California's growing reserves and bountiful surpluses while criticizing the Trump administration for not believing "in fiscal discipline" or "living within their means."

"We are worried about the next generation. They, seemingly, are not," Newsom said.

Also, state officials warned a host of proposed federal rule changes could cost the state up to $10 billion in funding.

"The things they are contemplating would be a very, very big deal for the state," said Keely Martin Bosler, director of the California Department of Finance. "These kind of changes could pull that much money out of the state."

That quandary will require balancing from Gov. Gavin Newsom, who is one of Trump's loudest critics and frequently engages with him on his preferred platform: Twitter.   Newsom showed few signs of softening his approach on Friday, calling Trump a bully who attacks California's immigrant communities.

"When he attacks our diverse communities, he attacks the values of this state. I take that personally," Newsom said.

Last year, California became the first state to offer full taxpayer-funded health benefits to low-income adults 25 and younger living in the country illegally. This year, Newsom wants to extend those benefits to adults 65 and older living in the country illegally. The coverage would begin in 2021 and cover about 27,000 people initially with an estimated cost of $350 million when fully implemented.

But he did not make people living in the country illegally eligible for the state's earned income tax credit, which gives money to low-income people as part of their tax refunds.

"One is health care, a right from my perspective, and one is allowing working families to keep more of what they earn. I distinguish the two," Newsom said. "It's also a question of capacity. We want to do a lot of things, but we can't do everything."

Republican Assemblyman Jay Obernolte opposes extending taxpayer-funded health benefits to adults living in the country illegally. He said California is having a hard time meeting the needs of people currently on the program -- pointing to an audit from August that said the state failed to ensure adequate access to care for people in 18 rural counties.

"We have an obligation to the Californians who already depend on us for medical coverage to make sure we are providing the services we promised them before we talk about expanding the program to other populations," Obernolte said.

Newsom proposed giving public school teachers $20,000 if they would teach four years at in a high-need subject at a high-need school. That program alone would cost $100 million, which Newsom called "a commitment to reward those teachers for doing the right thing."

Newsom's budget proposed one new tax: an additional tax on vaping. E-cigarettes are already taxed like other tobacco products, but Newsom is proposing an additional $2 tax for each 40 milligrams of nicotine in E-cigarettes. The tax would bring in about $32 million, and the state would spend it on enforcement and youth prevention programs.

"It scares the hell out of me as a parent," said Newsom, who has four children. "I think this vaping tax is long overdue. I don't think we'll have major problems with it because I think the vast majority of legislators support it."

The spending plan includes a $5.6 billion surplus. The budget would create a number of new programs and agencies, including an Office of Health Care Affordability and the Department of Financial Protection and Innovation, which will seek to revive Obama-era consumer financial protections.

The budget would also pay down state debt, including an additional $5.9 billion toward the state's unfunded pension liabilities.

Newsom already provided details on key areas of his budget in recent days, outlining steps to curb homelessness, wildfires and the cost of prescription drugs.   He signed an executive order Wednesday creating a proposed $750 million fund to pay rents, fund affordable housing or help board and care homes.

On Thursday, Newsom proposed having California become the first state to make its own prescription drugs, to "take the power out of the hands of greedy pharmaceutical companies." California would contract with generic drug companies to create a single market for drug pricing.

On Friday, he declared himself the state's "homeless czar," after promising a year ago to appoint one, while striking back at President Donald Trump's repeated criticism of the state's Democratic leaders for not doing enough.

"He's tweeting, we're doing something," Newsom said. "We don't need him to identify this problem."

The budget proposal is a record spending level, prompting caution from Republican lawmakers.

"I caution the Governor and lawmakers to ensure we achieve results for Californians, and not just spend," Republican Sen. Jim Nielsen said.