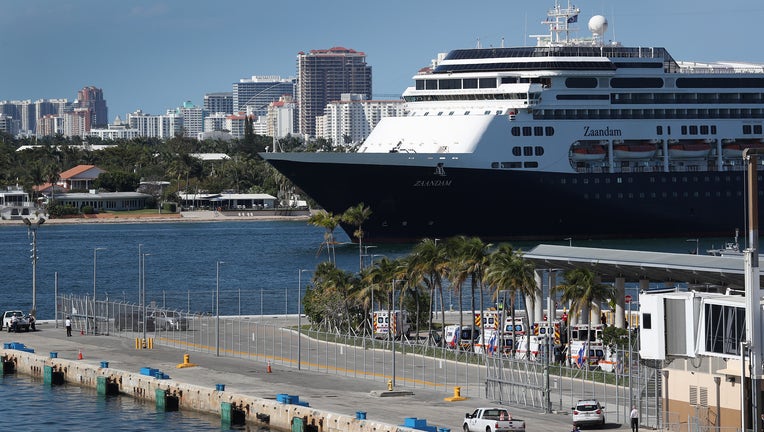 FORT LAUDERDALE, FLORIDA - APRIL 02: Ambulances are seen waiting as the Zaandam cruise ship pulls into Port Everglades on April 02, 2020 in Fort Lauderdale, Florida. The Holland America cruise ship had been at sea for the past 19 days after South Ame

The U.S. Centers for Disease Control and Prevention said Wednesday its no-sail order will remain in place until Nov. 1 for cruise ships despite a request from the Cruise Lines International Association to lift the order several months early.

The CLIA said it believes cruise lines are ready to sail again from U.S. ports and asked the CDC to allow for a phased resumption by the beginning of July, a timeline correlating with when President Joe Biden said he hopes small groups can begin to gather again.

Amid the ongoing COVID-19 pandemic, cruises have resumed or continued in several areas of the world. CLIA’s President and CEO Kelly Craighead said in a statement those voyages have been successful "with industry-leading protocols that have effectively mitigated the spread of COVID-19."

The CDC, however, said its no-sail order in the U.S., which is in effect until Nov. 1, 2021, remains unchanged. The CLIA also called on the CDC to update its most recent no-sail order, which has been in effect since October 2020.

"The outdated CSO, which was issued almost five months ago, does not reflect the industry’s proven advancements and success operating in other parts of the world, nor the advent of vaccines, and unfairly treats cruises differently. Cruise lines should be treated the same as other travel, tourism, hospitality, and entertainment sectors," Craighead said.

On Wednesday, the CDC said it is working on updating its no-sail order.

"Returning to passenger cruising is a phased approach to mitigate the risk of spreading COVID-19. Details for the next phase of the CSO are currently under interagency review," the agency said in a statement to FOX Television Stations.

Since COVID-19 most commonly spreads from person to person by respiratory droplets during close physical contact, packed cruise ships were hotspots for infection at the outset of the pandemic. Several ships with onboard outbreaks were even stranded at sea, barred from docking and disembarking over concern of further spreading the virus.

Many cruise lines opted to suspend their own operations. The CDC first issued its no-sail order on March 14, 2020.

Meanwhile, some cruise lines are now beginning to offer trips outside of the U.S. to passengers who can prove they’ve been vaccinated.

Last week, Royal Caribbean announced it will resume sailing from the Bahamas in June. Adult passengers will be required to be vaccinated against COVID-19 and passengers under the age of 18 will only be allowed onboard if they have a negative coronavirus test result.

COVID-19 vaccination efforts are ramping up across the country, meeting Biden’s goal of administering 100 million doses by his 100th day in office.

RELATED: CDC: 1 in 4 Americans have received at least one dose of COVID-19 vaccine

He also said his aim is to let Americans gather at least in small groups by the Fourth of July.

Even as he offered optimism, Biden made clear that the July 4 timetable requires cooperation from Americans to continue to wear face coverings, maintain social distancing and follow federal guidelines meant to slow the spread of the virus in the near term. He also called for individuals to roll up their sleeves to get vaccinated as soon as they're eligible.