A Chicago police officer is filing a complaint against a fellow officer for kneeling with a Black Lives Matter sign in front of their police union headquarters.

CHICAGO - A Chicago police officer is filing a complaint against a fellow officer for kneeling with a Black Lives Matter sign in front of their police union headquarters.

Both officers have been on the force 20-plus years, but they have differing views on the BLM movement.

Officer Carmella Means took a viral photo last month that showed her kneeling in front of the Fraternal Order of Police’s headquarters while holding a sign that said, “Black Lives Matter.”

But not everyone saw it that way.

The 25-year veteran with the Chicago Police Department has been brought up on  charges by 27-year veteran and fellow officer Frederick Collins.

Means and Collins are both Chicago police officers and African American. However, they both have very different views on the BLM movement. 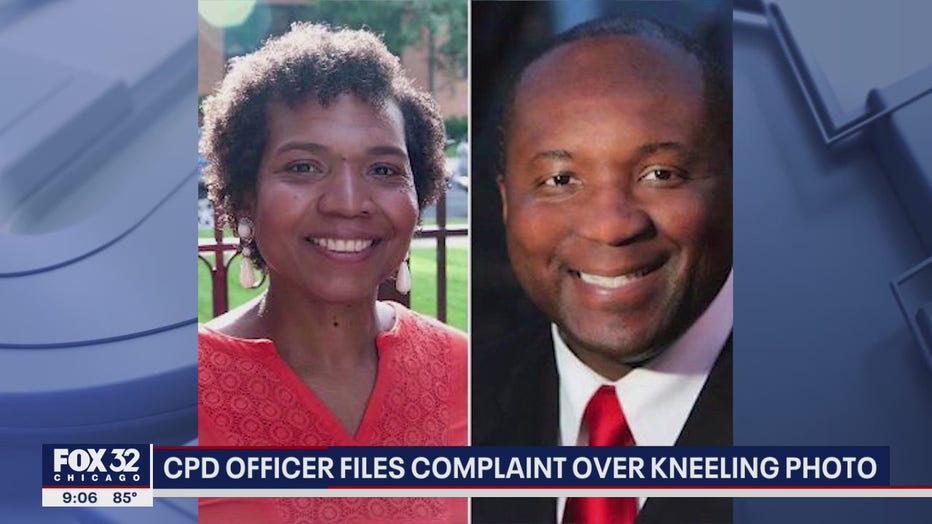 “To have organizations that wish us dead, call us the N-word…that destroy stores in our neighborhood, that promote violence... how could you kneel in support of that type of organization?” Collins told FOX 32.

The FOP says means violated its constitution and by-laws and they say she failed to create a spirit of fraternalism and mutual helpfulness among the membership.

FOX 32 asked Collins if he supports the fact that she could be kicked out of the FOP.

“I think that if she had a gripe, the lodge offers you plenty of opportunity to bring anything before the members,” he said. “I’ve been out there in the marches, I’ve held my fist up, but we aren’t going to kneel before anyone but God.”

Means will have a hearing and face the fop board in 30 days. She says she hopes it is fair.

“Jason Van Dyke unjustly murdered Laquan McDonald and shot him 16 times. The FOP fully supported him and gave him a job,” Means said.

Both officers spoke on their personal views, not the views of CPD.

FOX 32 did reach out to FOP National to see if they have a stance on kneeling. We have not yet heard back.