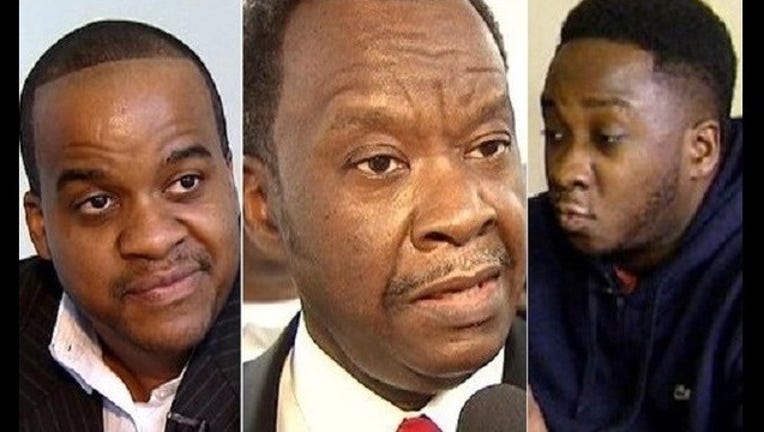 An estranged son of Chicago mayoral candidate Willie Wilson recently told FOX 32 News that the wealthy businessman only paid court-ordered child support, but otherwise ignored him as he was growing up. Now, another son spoke out defending their father.

Terrell Wilson told FOX 32 that Willie has been a good father to him, especially after he became an adult and wanted to join his multi-millionaire father in business.

"I'm heading up the Youth, the youth side of the campaign," Terrell said.

Terrell, 36, said he's deeply involved in his father's bid to become mayor of Chicago and in Willie's $60-million business empire. The two conferred Monday at Willie's penthouse apartment atop a Downtown high-rise. Willie talked off-camera about the allegations made by Linda Shannon, his former live-in girlfriend, and their son, Mario Shannon. Willie acknowledged he'd had virtually no contact with that son, but said he did offer to pay for the young man to go to college.

"I say [he was a] good [dad], because, in my opinion, just in life, I always say that, if you're gonna accept the man's strengths, you gotta accept his weaknesses as well. So, I always highlight the positive," Terrell said.

Terrell said there were times in his life when he, too, was estranged from his father, who worked long hours and was often away from home. Terrell said he and two older brothers joined a criminal street gang as teenagers. In the mid-1990s, he said then 20-year old Omar Wilson was murdered in a gang-related dispute.

FOX 32: How did you and Omar get involved in the gang life? How did that happen?

"Well, it was really just environment. We just made a decision, from our environment, that this was something that really influenced us," Terrell said. "My older brothers, this was their lifestyle. So, I wanted to be like them."

Terrell said that at the age of 27, he re-established a closer connection with his father. He said he ran a factory in Tennessee for his father, with more than 100 employees, closing it down when it became uncompetitive. He said he's made more than a dozen trips to China, helping his father move production to factories in that country.

FOX 32: It was cheaper to produce it over in China?

"Absolutely, Terrell added. "All the relationships that I got, I know people all over the world, literally. But I couldn't have that without my Dad's opportunity that he gave to me."