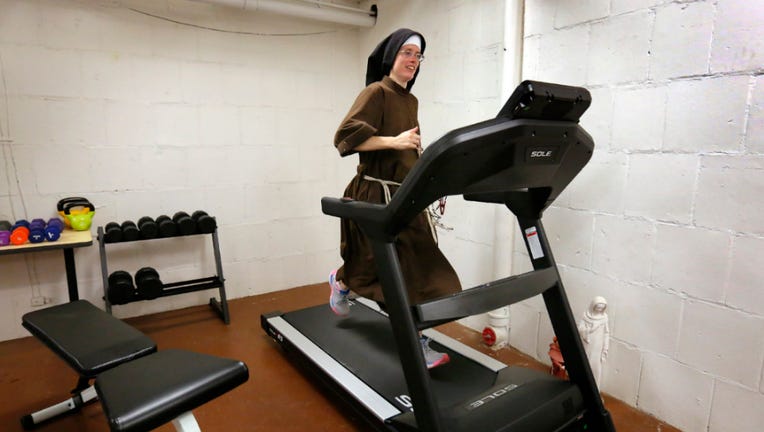 Franciscan Sister of the Eucharist of Chicago Stephanie Baliga runs on a treadmill in the basement of her community's convent on Aug. 15, 2020. (Karen Callaway/Chicago Catholic)

CHICAGO - Meet the nun on the run.

Sister Stephanie Baliga of Chicago has raised over $108,000 for charity after running a marathon on a treadmill after the city’s annual 26.2-mile race was canceled due to the coronavirus pandemic.

On Sunday, the Franciscan Sister of the Eucharist of Chicago ran an impressive 3:3 -marathon on a treadmill in the basement of her convent in West Humboldt Park, the Mission of Our Lady of the Angels confirmed.

Baliga ran Division 1 track at the University of Illinois at Champaign-Urbana and organizes Team OLA, a running group that competes in local races to fundraise for the outreach work of the religious community where she lives and serves, Chicago Catholic reports.

Before the 2020 marathon was canceled amid the ongoing outbreak of COVID-19, the nun promised pals she would complete the feat on a treadmill if the famous race was called off because she was so convinced it would still happen.

Jokingly describing herself as “real stubborn,” Baliga made good on her word over the weekend and completed the race at an impressive average of about 8:08-minute- mile splits.

The Franciscan sister's long-distance run was livestreamed on YouTube and Zoom, while her epic endeavor has raised over $108,000 for the Mission of Our Lady of Angels as of Tuesday morning.

West Humboldt Park has weathered a difficult summer amid unemployment and social unrest, while demand has tripled for the mission's food bank, per the Chicago Tribune.

“It is really beautiful because we’ve been delivering lots and lots of food to senior citizens stuck in their houses since March,” Baliga told the outlet of the pantry’s work. “I’m doing this in solidarity with them.”

“I’ve been blessed and have a normal-ish life. My life hasn’t completely stopped. To run in solidarity with people who have had to put their life on hold, it’s a very powerful prayer experience,” she added.

Baliga has run the Chicago Marathon each year since 2011, WLS reports, and plans to submit her time to the Guinness Book of World Records in hopes of setting a score for the fastest women’s treadmill marathon.

Beyond the track, one friend praising the nun’s inner fire as awe-inspiring.

“Nothing scares her,” said P.J. Weiland, a pantry volunteer and treadmill race organizer. “She’s fearless. She’s confident and humble. She’s confident God has her back and she’ll be taken care of.”

“Nothing intimidates her. She’ll just say, ‘OK, let’s figure out a way to gut the floor. God will provide. Let’s do this.’ She’s small but mighty. All the sisters there are. They’re doers and get stuff done.”