CPD says a person of interest is in custody, and officers are working to gather evidence to support charges for the acts of vandalism.

CHICAGO - Several Chicago synagogues and Jewish businesses were targeted by vandals, and one man was assaulted over the weekend, according to Chicago police.

CPD says a person of interest is in custody, and officers are working to gather evidence to support charges for the acts of vandalism.

"When this community, our Jewish brothers and sisters are threatened, we are all threatened and we have to regard it exactly that way," said Mayor Lightfoot.

CPD Commander Joseph Brennan said thanks to the community's help they are discovering there are more racist acts, that may be connected.

"We did find out later on this afternoon, there were additional swastikas painted in different locations. We're reporting that documenting that and we're investigating that as well," said Commander Brennan.

The first incident is believed to have happened sometime Saturday when the front glass doors of a synagogue at 2800 West North Shore Avenue were broken.

Windows were also broken just before 7 a.m. Sunday at another synagogue on the 3600 block of West Devon in the Lincolnwood neighborhood.

After 4:30 pm, swastikas were spray-painted on the wall at the rear of the F.R.E.E. Synagogue in the 2900 block of West Devon Avenue.

Rabbi Levi Notik said one man was physically and verbally assaulted on his way to the synagogue.

"A young Jewish male was on his way to evening services last night and somebody jumped him and used some racial slurs. So he came into the synagogue very shaken up. We got him the help he needed," said Notik.

He said the man is recovering at home, but people in the neighborhood are on edge after several incidents along the stretch of Devon Avenue where several Jewish communities connect.

"We have a very close-knit community, and we've been getting a lot of questions, and I really feel like it is important for the people to hear directly from the police as to what measures they are taking," said 50th Ward Ald. Debra Silverstein.

Ald. Silverstein also said the incidents "have all the hallmarks of hate-based crimes."

"These incidents are particularly upsetting as they come mere days after Holocaust Remembrance Day and in light of a worrying increase in antisemitism across the nation," Silverstein said in a statement. "Hate has no place in this neighborhood and bigotry will not be tolerated."

A grocery store and bakery also had windows shattered. Swastikas were spray-painted on a cargo container nearby.

Synagogue FREE is the headquarters of their entire network of synagogues. It was bought after their previous synagogue was burned down in 1993. The building also serves as a food bank where worshipers pack thousands of meals each month for those in need. 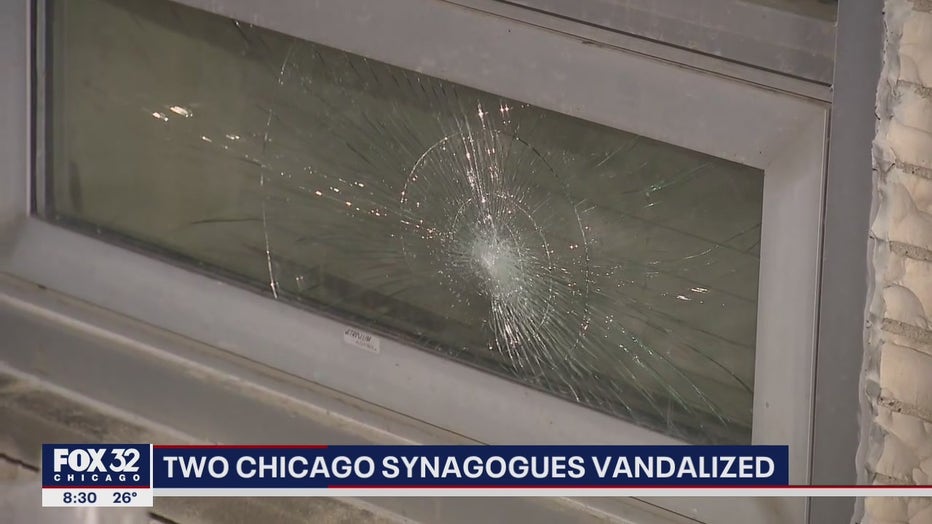 Notik and other members of the community praised the quick response by police.

"I do feel when something happens it is addressed. But I think you always have to be vigilant... to watch out for anything that takes place," said Dov Tarkieltaub. "I believe God is out there protecting us."