Chicago woman tried saving 8-year-old after shooting: ‘I will never forget her face’

FOX 32 spoke exclusively Tuesday night with a woman who tried to save an 8-year-old girl who died after being shot Monday night.

CHICAGO - FOX 32 spoke exclusively Tuesday night with a woman who tried to save an 8-year-old girl who died after being shot Monday night.

The woman who has medical experience worked in vain to help little Dajore Wilson.

Shanna Lamb says she will never be the same. She lives in Canaryville, but blocks away from where the shooting took place. She was visiting a friend close to the scene, heard the shots, made sure her own kids ran to safety and then she jumped in to help.

“I saw the mother pulling the baby out of the car. The father looked up at us and said, ‘please help us, they shot my baby,’” Lamb said.

That is when Lamb, who is a mother of two, used her 15 years of experience as a certified nursing assistant to try and revive the 8-year-old girl.

“I started CPR. Kept doing chest compressions until the EMTs came. I really did try hard to keep her alive,” Lamb said. 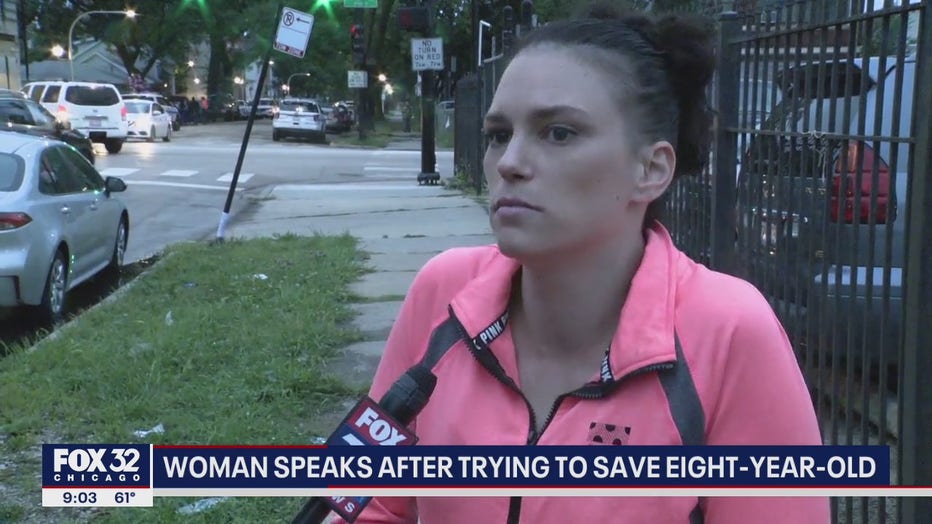 She says when Dajore left the area of 47th and South Union, she was breathing with a slight pulse, but was later pronounced dead at Comer Children’s Hospital.

“I did what anyone would have done. What I would’ve wanted them to do if it were my baby,” Lamb said.

Chicago police are actively looking for a newer black Dodge Charger. Police say whoever was inside the vehicle waited until a light turned green and started firing bullets into the SUV that Dajore was in, along with her mother who was injured after the SUV crashed into a tree. Her father was shot, and so was another woman that has not been identified.

Police are asking for the public’s help in solving the case.

“I will never forget her face as long as I live, or her mother’s screams,” Lamb said.

A vigil will take place in the Canaryville neighborhood Wednesday night at 6 p.m.

If you know who was inside that black Dodge Charger, police need to hear from you. Anonymous tips can be made to CPDtip.com.