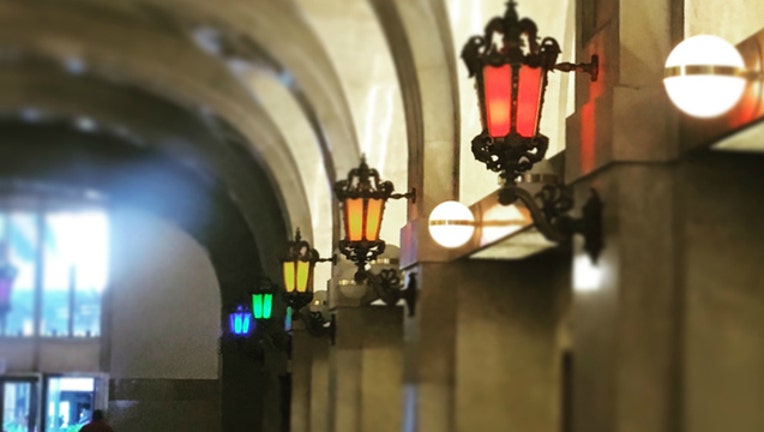 CHICAGO (FOX 32 NEWS) - The lights inside City Hall were swapped for rainbow-colored fixtures in the days following the tragic mass shooting at a gay Orlando nightclub, which left 50 dead and dozens more with injuries.

Chicago is one of countless cities around the world to show support for the LGBTQ community in the wake of the June 12th massacre.

The spire of the One World Trade Center was lit up in rainbow colors along with dozens of other landmarks such as the Dallas skyline and the Harbour Bridge in Sydney, Australia..

Mayor Rahm Emanuel decried the weekend's "horrendous violence" in a statement on Sunday roughly a week before the kickoff of Chicago's 47th annual Pride Parade in Boystown.

"Last night's horrifying act of terrorism in Orlando was an attack on our most fundamental values as Americans," Emanuel said in a statement. "On behalf of the City of Chicago, Amy and I send our deepest condolences to the friends and family members of those who were lost. June is a time when all Chicagoans and all Americans proudly celebrate the contributions of our LGBT community. This horrendous violence will only deepen our resolve to continue building a society that values everyone, regardless of who they love. The thoughts and prayers of Chicago will remain with the victims of this attack as they seek comfort and courage in the days ahead."

A redditor posted a picture of the rainbow-colored lights on Wednesday.