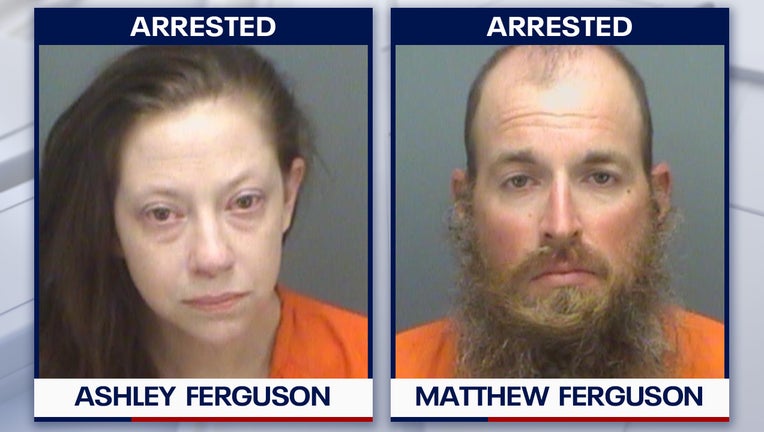 CLEARWATER, Fla. - A Clearwater couple faces manslaughter and child neglect charges after investigators said three children were found in deplorable conditions, and one of the children died in the home.

The Pinellas County Sheriff's Office responded to the couple's home on July 12, 2020, in response to an unresponsive child.

According to detectives, 33-year-old Ashley Ferguson found the child unresponsive in a bedroom and called 911. When Largo Fire Rescue responded to the scene, they pronounced the child dead.

Investigators said the deceased child and two other children in the home were malnourished, left unattended for long periods of time, and had not received adequate medical care.

The children had bedsores, diaper rash, severely matted hair, were unable to speak, and unable to walk or bear any weight on their legs, the sheriff's office said. Ferguson admitted to investigators that the children's primary source of food was milk.

Detectives said neither Ashley nor Matthew Ferguson, 34, ever sought medical treatment for the children. One of the children had lost his ability to walk in April of 2020. Detectives said Ashley admitted to Matthew that she had lied about the medical appointments.

The two surviving children were placed in the care of a family member on July 16, and both children needed immediate medical care, including oral surgery and feeding therapy, for their injuries. The sheriff's office said they will also receive physical and speech therapy.

An autopsy was conducted on July 13 to determine the other child's cause of death. The results of that autopsy came in on Feb. 26, 2021, determining that the child's death was a homicide due to chronic child neglect.