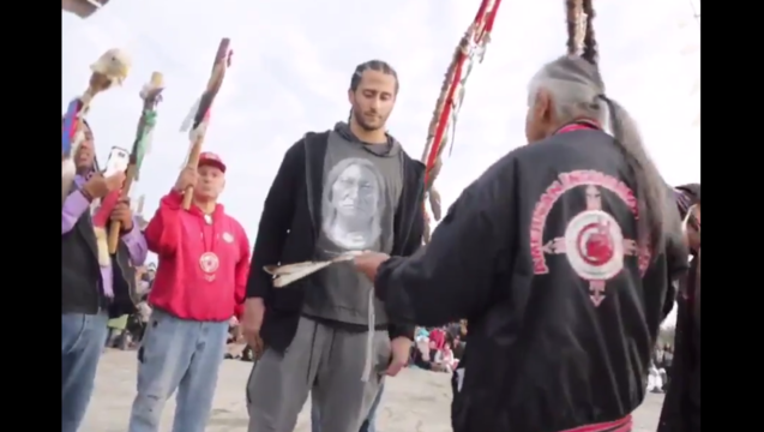 True to the theme that he’s been nationally talking about – or rather, taking a knee for – since last summer, former 49er Colin Kaepernick attended an “Unthanksgiving Day” celebration on Alcatraz Island.

The Indigenous Peoples Sunrise Ceremony, held annually on Thanksgiving since 1975, commemorates the survival of Native American peoples following the settlement of Europeans in the Western Hemisphere.

Kaepernick began making headlines in August when a photographer spotting him sitting during the national anthem. He told reporters that he sat, or took a knee, because he was fighting to combat the oppression of people of color and ongoing issues with police brutality. His act of civil disobedience has divided the country, from President Trump, who said Kapernick's actions are disrespectful and worthy of firing, to GQ Magazine, whose editors named him 'Citizen of the Year.'

“Today, I was on Alcatraz Island at the Indigenous People’s Sunrise Gathering, in solidarity with those celebrating their culture and paying respects to those that participated in the 19-month occupation of Alcatraz in an effort to force America to honor the Treaty of Fort Laramie,” he tweeted.

In a short video attached to the tweet, he added he was “honored and humbled” to be participating in the Native American rituals. His video showed Native American dancing, a parade and community members vying to take selfies with him. He wore a shirt with a Native American on the front. The crowd whooped and cheered.

According to the San Francisco Chronicle, his speech continued:

"I realize that our fight is the same fight. We're all fighting for our justice, for our freedom, and realizing that we're in this fight together makes it all the more powerful.