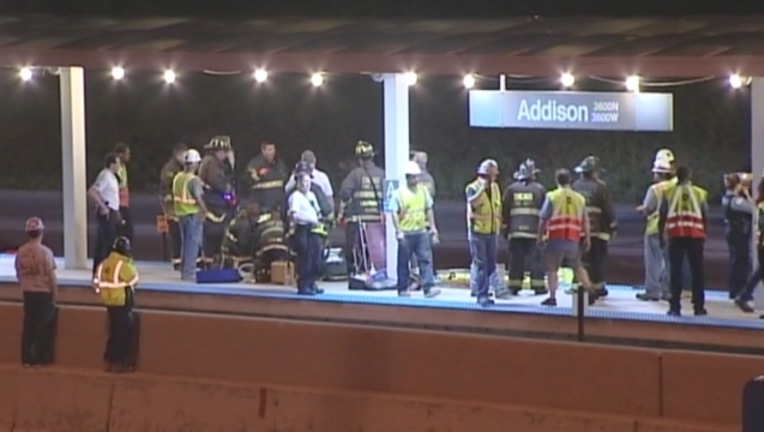 A CTA worker died early Saturday after falling on the tracks at the Addison Blue Line. | Network Video Productions

CHICAGO (Sun-Times Media Wire) - Pearl Hendrix loved her job at the CTA, but had dreams of one day opening her own business, her family said Saturday.

Hendrix, 40, of the 15400 block of Maple Lane in Markham, died early Saturday morning after falling on the tracks at the Addison Blue Line station in the Irving Park neighborhood on the Northwest Side, according to her family and Chicago Police.

Hendrix was working as a flagger to help signal trains on the track level when she fell on the track bed about 1 a.m., according to police and CTA spokesman Brian Steele.

Hendrix grew up in Markham and graduated from Bremen High School in Midlothian, her sister Vannesta Wilson told the Chicago Sun-Times. Hendrix went on to get an associates degree at ITT Technical Institute and also completed massage school. She worked for the CTA for nearly three years.

“She was a people person,” Wilson said. “Always smiling; she had the biggest personality. Always an encouraging word for someone. She really loved her job at the CTA, that was her thing.”

Wilson said her sister was someone with big dreams, who was always working on projects that she might one day turn into a business. Her mother said she was a hard worker and a good daughter, who had big plans for her life ahead of her.

“God, we’re just really going to miss her,” Wilson said. “She was special.”

Hendrix attended Victory Temple Church of God in Christ in Midlothian, where her family said arrangements for her funeral service are being made.

The 37-year-old woman, who works as a flagman to help signal trains on the track level, fell on the track bed at 1 a.m. in the 3600 block of West Addison, according to Chicago Police and CTA spokesman Brian Steele.

Pearl Hendrix was pronounced dead at the scene at 1:50 a.m., according to police and the Cook County medical examiner’s office. She lived in the 15400 block of Maple Lane in Markham.

Trains were halted in both directions for over an hour but began to move again around 2:40 a.m.