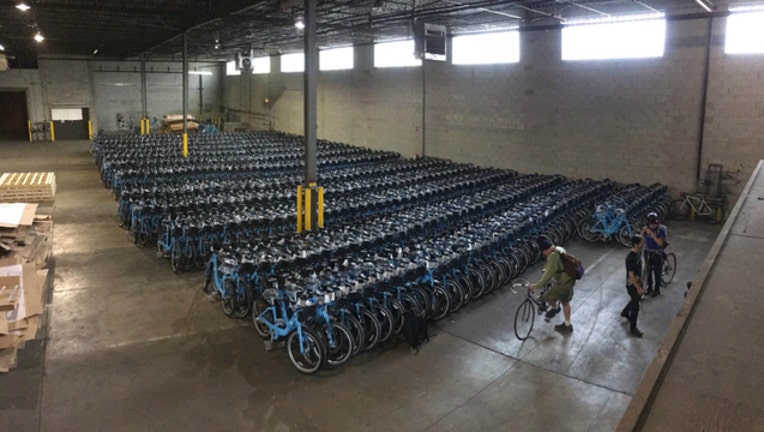 More than 1,000 new blue Divvy bikes are being assembled and stationed at the warehouse in Pilsen for introduction at new stations in the coming weeks. | photo from CDOT

CHICAGO (Sun-Times Media Wire) - The blue Divvy bikes which have become a fixture in many Chicago neighborhoods will soon be expanding to new neighborhoods on the West and South sides; and into the suburbs.

Divvy officials announced a the arrival of 1,077 new bikes to hit the streets this year in a system expansion that will add 85 more bike stations in Chicago, pushing the boundaries toward and beyond city borders.

The bikes are now being assembled in Divvy’s warehouse in Pilsen, where they will also be tested and safety inspected before hitting the
streets this summer.

“The bikes will be deployed as part of a major upcoming expansion that will bring Divvy to a number of new neighborhoods focused on Chicago’s South and West sides,” a statement from the company said.

Divvy, owned by the Chicago Department of Transportation and operated by the bike share company Motivate International will begin installing stations in the  coming weeks, the statement said.

“CDOT is very excited to be working with Divvy to expand access to what it is already the largest bike share system in North America,” CDOT First Deputy Commissioner Randy Conner said in the statement. “The continued growth of Divvy demonstrates our commitment to improving transportation options and quality of life in neighborhoods throughout Chicago.”

Since a June 2013 launch, more than 7 million trips have been taken by Divvy riders, whose numbers have risen 48 percent in the last 12 months. More than 750,000 people have used the service, and over 33,000 are annual members.

By the end of summer, there will be more than 5,600 total bikes available citywide.