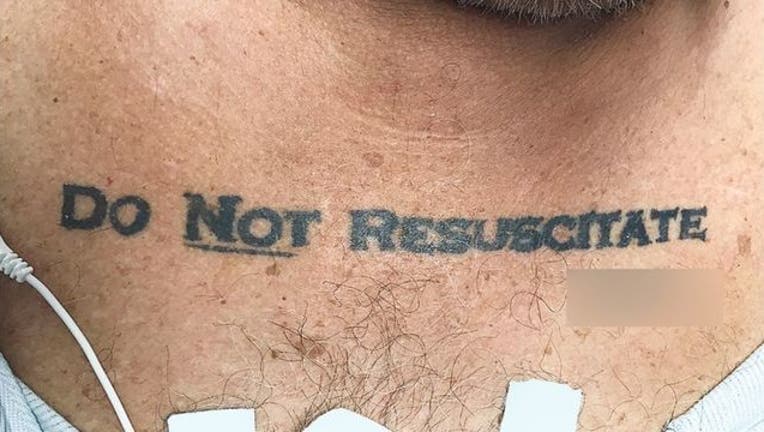 Doctors faced an ethical dilemma after an elderly man with a "Do Not Resuscitate" tattoo on his chest appeared in their emergency room, unconscious and near death. (University of Miami)

FOX NEWS - Emergency room doctors at a University of Miami hospital faced a vexing ethical dilemma when paramedics wheeled in an unconscious man with a “Do Not Resuscitate” chest tattoo.

The case is described in a case study published Thursday in the New England Journal of Medicine.

Doctors treating the 70-year-old diabetic patient at first began lifesaving efforts. The patient had an elevated blood alcohol level and a history of pulmonary disease.

But tattooed "do not resuscitate" requests are not considered valid by the Florida Department of Health and the doctors were unable to immediately locate the man's family members or even identify him.

“We initially decided not to honor the tattoo, invoking the principle of not choosing an irreversible path when faced with uncertainty,” the University of Miami doctors write in the case study.

So they began administering antibiotics and intravenous fluids.

“This decision left us conflicted owing to the patient’s extraordinary effort to make his presumed advance directive known,” the doctors write. “Therefore, an ethics consultation was requested.”

Ethics consultants soon advised the doctors that the tattoo likely represented his wishes and should be honored.

The consultants told the physicians that “the law is sometimes not nimble enough to support patient-centered care and respect for patients’ best interest,” according to the doctors.

After a DNR order was written, officials found an official copy of the man’s DNR order from the Florida Department of Health. He died overnight without further lifesaving efforts, the doctors write.

“We were relieved to find his written DNR request, especially because a review of the literature identified a case report of a person whose DNR tattoo did not reflect his current wishes,” the doctors add.