African American Pearl Harbor hero to be honored by Navy

Doris Miller manned a machine gun and returned fire during the 1941 attack on Pearl Harbor. An African American was not allowed to man a gun in the Navy at the time.

He was an American man of many firsts, going beyond the call of duty.

A future Gerald R. Ford-class aircraft carrier will be named after him.

It’s the first aircraft carrier ever named for a black American.

“In selecting this name, we honor the contributions of all our enlisted ranks, past and present, men and women, of every race, religion and background,” said Acting Secretary of the Navy Thomas B. Modly in a statement. “Dr. Martin Luther King, Jr. observed, ‘Everybody can be great - because anybody can serve’. No one understands the importance and true meaning of service than those who have volunteered to put the needs of others above themselves.”

This will be the second ship named in honor of Miller.

USS Miller, a destroyer escort, was previously named in his honor.

His image was used in a 1943 U.S. Navy recruitment poster. 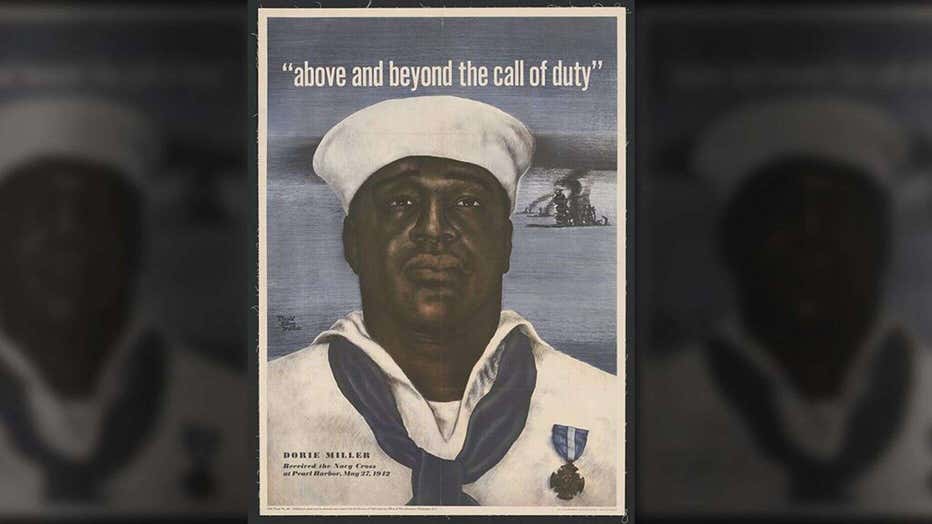 The image of Doris Miller was used in a 1943 U.S. Navy recruitment poster. (Photo credit: David Stone Martin/Library of Congress)

Miller was recognized for manning a machine gun on the USS West Virginia and returning fire against Japanese planes during the Dec. 7, 1941 attack on Pearl Harbor.

Miller, then 22, was collecting laundry when the attack alarm sounded. His normal battle station in an antiaircraft battery magazine was destroyed by a torpedo. He went on deck and carried wounded soldiers to safety before receiving orders to aid the mortally wounded captain on the bridge.

A black American was not allowed to man a gun in the Navy in 1941, Doreen Ravenscroft, a team leader for the Doris Miller Memorial, said, as The Associated Press reported.

“He subsequently manned a 50-cal. Browning anti-aircraft machine gun until he ran out of ammunition and was ordered to abandon ship," the Navy said, noting Miller was not trained to operate the gun.

"It wasn't hard. I just pulled the trigger and she worked fine. I had watched the others with these guns. I guess I fired her for about 15 minutes," Miller said later, according to Naval history records.

RELATED: Timeline: The critical events which led to the Japanese attack on Pearl Harbor

Miller was the first black American to receive the Navy Cross for valor.

Admiral Chester W. Nimitz, the commander in chief of the Pacific Fleet, presented the Navy Cross to Miller in Pearl Harbor in May 1942. 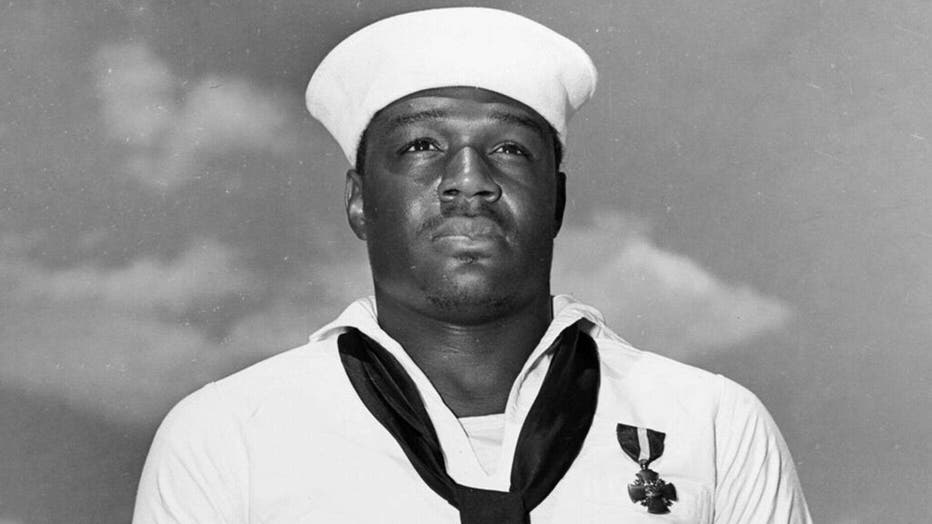 The U.S. Navy is expected to honor a World War II hero when a new aircraft carrier is named for Mess Attendant 2nd Class Doris Miller. (Photo credit: US Army)

Miller died while serving on a ship that was torpedoed by a Japanese submarine in November 1943.

“I think that Doris Miller is an American hero simply because of what he represents as a young man going beyond the call of what’s expected,” said Ravenscroft.

“Without him really knowing, he actually was a part of the Civil Rights movement because he changed the thinking in the Navy,” Ravenscroft added.