One training scenario played out Monday morning in Park Forest.

New this year is a new approach for the rescue task force: sending paramedics in with the police.

In south suburban Park Forest, the police and fire departments are practicing for an emergency, specifically a large-scale attack, from somebody armed with a weapon.

“The state of things today, it’s a realistic thing that someday we might have to do, so we need to be trained on it,” said Taylor Bordewyk, Park Forest firefighter.

They created a fictional scenario of a man armed with a machete entered a jazz concert at the Park Forest Freedom Hall killing one person and injured others, before barricading himself in a closet inside the venue. 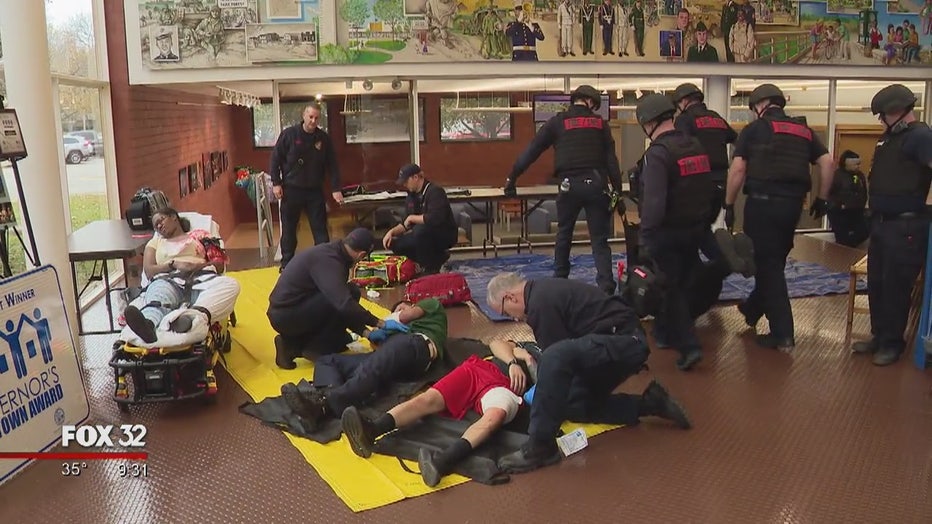 The first responders walk through their response: How they would react and work together to safely remove the victims from the scene.

“When I’m walking into that room and his hand is on my back and you feel absolutely safe and we can go in there and do what we need to do to help people out,” said Bordewyk.

“Police and fire can't take the time anymore to wait for the scene to be completely secure,” said Christopher Mannino, Park Forest Police Chief. “Oftentimes we have to go in when there is some risk but to make sure we are treating people and bringing them to safety.”

Chief Mannino allowed FOX 32 reporter Elizabeth Matthews to sit in on the tabletop exercise, representing the media and explaining how she would respond to this fictional scenario, such as the questions that she would ask and how she would help.

“We need to be ready because it can happen anywhere at any time and it's an unfortunate byproduct of our times,” said Chief Mannino. “In police and fire, our role is to make sure that we are thinking about it and ready for it.”

Park Forest strives to keep its residents informed as they have a reverse 911 communication system called, "Code Red” where residents can sign up to get an alert about ongoing situations.